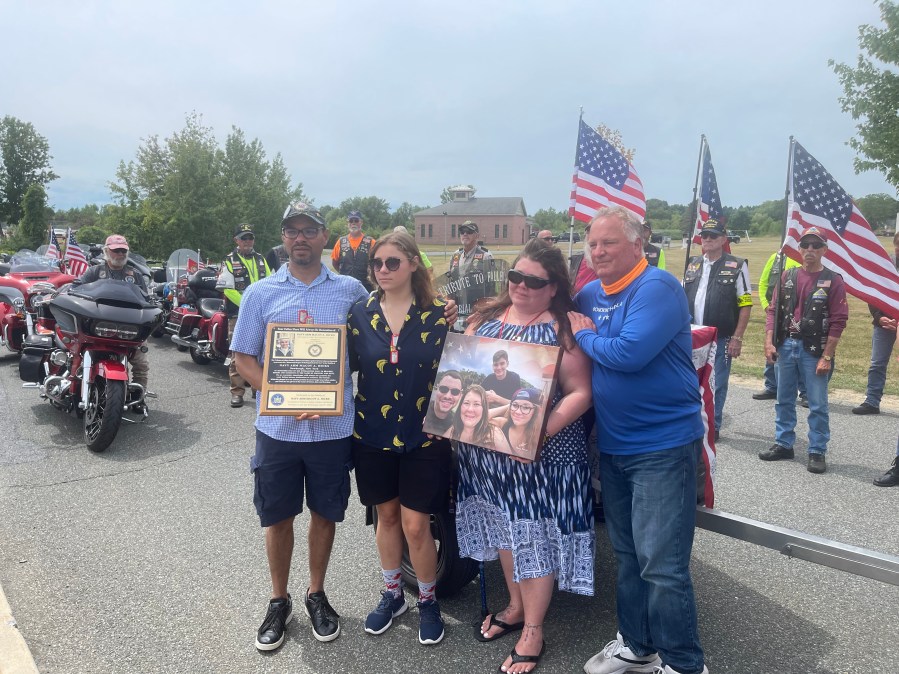 SARATOGA COUNTY, N.Y. (NEWS10) — From Eugene, Oregon to Arlington National Cemetery, riders over the course of a month will travel through 18 states and make 68 home visits to Gold Star families. All while keeping an eternal flame constantly lit.

Two tributes happened Wednesday in the Capital Region. The first was for Aviation Boatswain Mate (ABM) Macoy Hicks. Hicks served as a ceremonial guard in the United States Navy before being assigned to the USS Nimitz in Bremerton, Washington. Hicks suffered from PTSD and took his own life in 2019 according to his father.

“Macoy was our fireball as a child. He had a ton of energy. He was always super happy. He just lit up a room whenever he came into it. In high school, he decided he wanted to serve the country so he signed up to join the Navy in 2017,” says Macoy’s father Michael Hicks.

Since Macoy’s passing, his family has dedicated their time to helping vets with PTSD. icks Strong. We link military members via therapists via telehealth and we cover up to 24 sessions for each,” says Michael Hicks.

The second tribute was for Specialist (SPC) Abigail Jenks in Saratoga Springs. Jenks was a solider in the United States Army assigned to the 82nd Airborne Division. Jenks died during a training operation in April of 2021. “They really have acknowledged Abby on such a personal level for everyone to see. And it is just very heart warming and to keep Abby’s memory alive,” says Jenks’ mother Mary Elizabeth.

For these Gold Star families, who were presented memorial plaques and able to sign an American flag with notes from other families, they say tributes like this remind them that their heroes are not forgotten.

“It’s our mission to make sure that that doesn’t happen. And when we visit these families you can already see the tears in their eyes when we show up and we show up with the memorial flame. You can see what it means to them on our arrival,” explains Warren Williamson, Executive Director for Tribute of Fallen Soldiers Northwest.