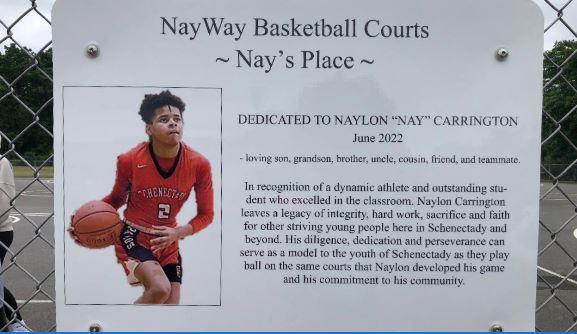 SCHENECTADY, N.Y. (NEWS10) — A basketball court in Schenectady was dedicated on Wednesday to a young man who lost his life in a car accident back in 2020. His family and the city remembering him and his love for the sport.

Those are the words Sondra Banks uses to describe her son, Naylon Carrington, who tragically died in a car accident in Niskayuna in October 2020.

On what would have been his 20th birthday, the City of Schenectady and friends and family of Naylon came together to dedicate the basketball court in Central Park to his memory. It’s called Nay’s Place. It shows his love of basketball and how he moved others with the sport.

“This is the place he spent a lot of his time,” Banks said. “He was self-taught in basketball here with his older brother and friends. He utilized it with his teammates, he came here when he had no other place.”

Pictures of Naylon line the fences, a bench named after him sits in front of a sign telling people all around just the kind of man he was.

“Naylon was inspiring in the sense that he heard the word no quite a bit and it did not stop him from working and trying to achieve a major goal of his,” John Miller, Varsity Basketball Coach for Schenectady High, said. “That was to make the basketball team and be involved.”

His family is carrying the torch so future players can see his dream.

“Come here, work it out and when you leave, you will have a plan, put it on the court,” Banks said. “That is what he tried to create, was a blueprint of following your dream.”