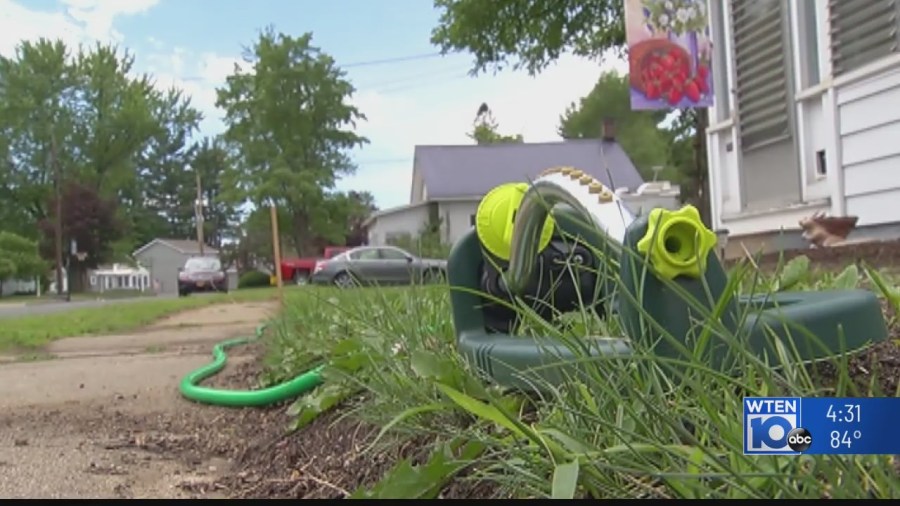 ROTTERDAM, N.Y. (NEWS10) — Summer is here and that means Rotterdam’s water use, just like many municipalities, shoots up with the rising temperatures.

“That puts a significant strain on our water distribution system and the major part of that, in our minds, is the water sprinkling systems,” says Deputy Supervisor Jack Dodson.

Although the town’s water use is usually around three million gallons a day between October and April, during the summer that water draw can get as high as 10 million gallons a day, according to town leaders. During Wednesday’s meeting, the town board announced a new water conservation program to avoid police responding to calls about neighbors sneaking their sprinklers on. Public works employees will respond instead to re-educate rather than reprimand.

“Then they’ll just hang a hang tag on the person’s door or give it to them if they’re home, and it explains the watering hours,” Supervisor Mollie Collins explains to NEWS10’s Mikhaela Singleton.

The town’s new approach reinforces a 2020 policy to allow homes with automatic sprinkler systems to be used on even calendar days for even numbered properties from 1 a.m. to 4 p.m. and the same for odd properties on odd calendar days.

Properties utilizing handheld watering or manual sprinklers can use them between 6:30 a.m. to 8 a.m and 6:30 p.m. to 8 p.m. on their respective odd or even calendar days.

This is just the first of the town’s many plans to address water issues before tackling the contentious water meter requirement from the DEC. A state representative responding to NEWS10 says Rotterdam is long past its March deadline to submit a plan detailing how the town will comply with residential water metering as a requirement of its withdrawal permit.

No alternatives to water metering were presented or discussed with the town at this time. DEC is currently awaiting a response and the revised meter installation schedule from the town and will continue to work with local officials to come into compliance.

However, town leaders claim they haven’t heard a peep from DEC after an April meeting with representatives.

“From a regulatory standpoint, we as the town can perfectly understand why a regulatory agency would be coming to us saying, hey you want to continue increasing your withdrawal but what are you guys doing in order to conserve water? We would expect the DEC if they are looking for any additional information that they would write a letter to the Town of Rotterdam that says this is the documentation we need from you, and we have not received that letter,” says Dodson.

“We are committed to having an open communication line with the DEC. That is important so that they understand we are taking it seriously and just keep them abreast of what’s going on and what steps we are taking,” Collins adds.

The town says they’ve focused on months of public information sessions educating the public on conservation and reminding them water meters are not in their immediate future.

“What we found during both those meetings is that there is an expectation from our residents that we are going to deliver a certain level of service, and it’s a two-way street in my mind. Service does indeed cost money and they need to understand what the cost associated with that is. I think they have a much better understanding of that now,” Dodson says.

What they hope is on the horizon are grants and approved applications to revamp the town’s aging pipelines and infrastructure to get the water into the homes efficiently first, then consider measuring it. Dodson says the town has applied for $30 million from the EPA’s Drinking Water State Revolving Fund and plans to apply in September for grants and low interest loans though the Water Infrastructure Improvement Act.

The town has also recently received a $1 million grant from Congressman Tonko’s office for improvements to the wastewater treatment plant. Board members say they find it more important to take care of these issues before turning attention to the DEC’s push to comply with its water meter requirements.

“From the town’s standpoint, it’s rather inconvenient to install meters on individual properties at homes if we can’t deliver water from our source to the tap because of our failing infrastructure,” Dodson says.

“We’ve also been reaching out to private companies, different ones, just to get more information on leak detection programs and seeing what the cost is for that so that we can also implement that and find out where are our major leaks? How much water are we losing?” Collins further explains.

“Who’s paying for these water meters? Rotterdam citizens aren’t, and if New York State is going to pay for it, they ought to pay for some other projects first,” adds Joe Mastroianni, Rotterdam Town Board member and NYS assembly candidate.

Water meters have also become a hot button issue as Mastroianni and incumbent Assemblyman Angelo Santabarbara race towards November elections. As NEWS10 has previously reported, a water metering plan and schedule submitted by the previous Rotterdam town board in 2020 had initially projected home installations could cost homeowners around $600. The DEC approved this plan in January 2022, but the current town board later appealed to the DEC to grant an extension to revise the metering plan.

Town leaders say they’ve reiterated again and again that the original plan and its cost to homeowners initially projected by consultant company Prime AE is no longer valid and is not a reflection of any future negotiations with DEC. However, Mastroianni claims Santabarbara has continued pushing the cost to homeowners as his main point of opposition while on the campaign trail.

“He continues to peddle this narrative to intimidate and scare seniors, people on a fixed income, people that are frustrated with the inflation and where the economy is right now. There’s people out there who still perceive the state is going to put water meters in and Rotterdam citizens will have to pay the additional $600 to install them. They are thinking this is terrible government so say no to water meters everybody. That spirit has been loud in Rotterdam, but the basis fueling that belief is just not accurate,” Mastroianni says.

Over a more than two week period, NEWS10 has made repeated attempts to reach Assemblyman Santabarbara for contribution to this story. We have not yet received any response.

NEWS10 has reached out again to DEC for clarification on what, if any, repercussions there are the longer Rotterdam remains out of compliance with the department’s request for a metering plan. DEC representatives only reiterate the department is open to aiding the town into reaching compliance.