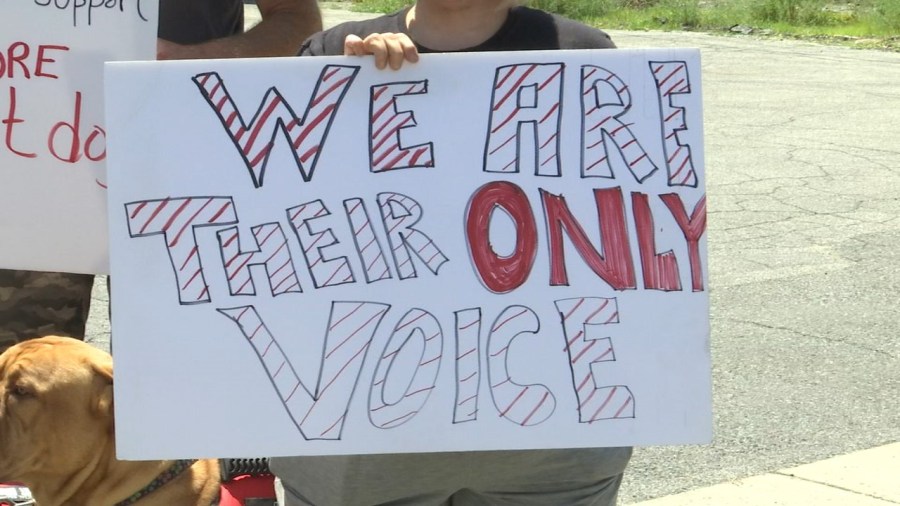 GLENS FALLS, N.Y. (NEWS10) — Pittsburgh resident Sandra Miranda was vacationing in Glens Falls last month and dropped her Australian Shepherd off at GFK9 on Warren Street. Hours later, she came to pick up Alfie only to find out he wasn’t there.

“It was one of the workers and she said I’ve got bad news your dog is missing,” Miranda said.

Miranda said she received no communication from GFK9 before arriving to pick up her dog. Alfie was missing for 16 days, but with the help of the community he was reunited with Miranda late Saturday night.

“They let us know that our dog was in their backyard and there I was, I picked him up and he just came to me,” Miranda said.

Her story led to a protest this weekend calling for the business to address what happened and other alleged animal abuse stories. Former employee Heidi Williams said she left after witnessing how animals were treated and the owner allegedly did little to address it.

“It came down to the point where this has happened too many times, too many dogs have died, been lost, abused and neglected and now we need to take a stand because they can’t speak for themselves,” Williams said.

Some protesters are calling for legislation that requires inspections for pet daycare centers.

“We know that children’s daycares get inspected, why can’t animals, because we know they are getting neglected,” Elizabeth Dragon said.

News10 did go inside to speak to the owner, Mike Tartaglione, he did not want to comment at this time. Tartaglione said, off camera, that he was happy Alfie was found and is home safe.