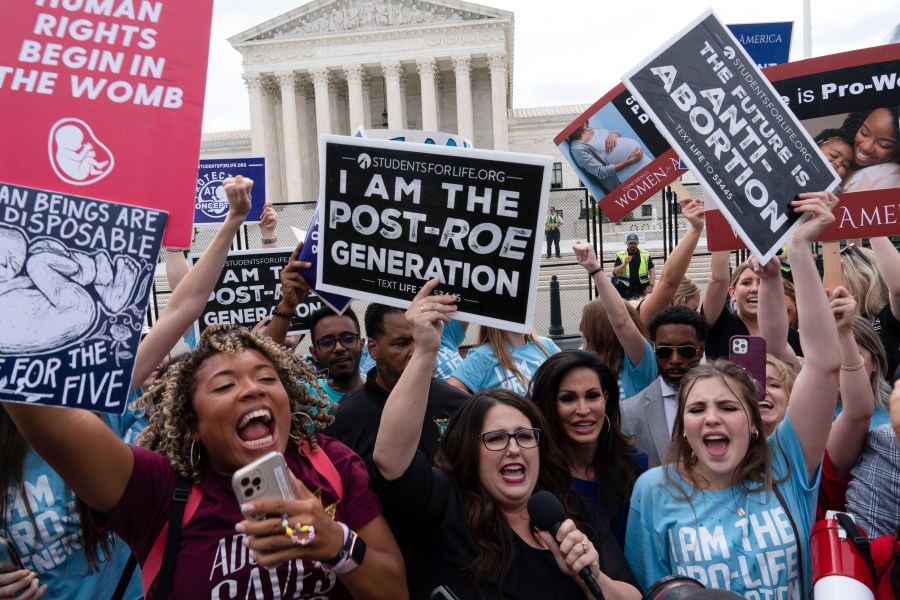 ALBANY, N.Y. (NEWS10) – The Supreme Court ended constitutional protections for abortion by overturning Roe v. Wade Friday morning. Officials across the nation have since reacted, issuing statements either in approval of the decision or condemning the actions of the court.

This list will be updated as more officials release their reactions to the ruling.

“Today, the Supreme Court took away the right of millions of Americans to make decisions about their own bodies. This decision is a grave injustice.”

“I want everyone to know that abortion remains safe, accessible, and legal in New York. Just last month, in anticipation of this decision, I made an historic $35 million investment to support our state’s network of abortion providers. Last week, thanks to the partnership of Majority Leader Stewart-Cousins and Speaker Heastie, I signed a landmark, nation-leading package of legislation that further protects the rights of patients and empowers reproductive healthcare providers.”

Hochul said the right to reproductive healthcare is a fundamental human right. History shows us, she said, that when abortion is banned, the procedure becomes unsafe for women.


What changes are coming to New York’s concealed carry

“Today will go down as a tragic day in the fight for human rights and women’s rights. Never in my lifetime has an established fundamental right been stripped away. SCOTUS has failed spectacularly in its duty to protect and uphold the constitutional precedent.”

Lieutenant Governor Gray went on to say that every Vermonter, and America, is owed the right to reproductive liberty. She said that in Vermont, elected officials will do everything they can to protect it.

“As a woman, I am outraged. As a Legislator, Senate candidate, and especially as a mother
of two daughters – I have never felt more driven. Here in NYS, we have the Reproductive
Health Act. And earlier this month, Governor Hochul signed legislation to protect the rights
of patients and empower reproductive healthcare providers.”

Ostrelich says protections like these do not happen in a vacuum. State legislatures are the last line of defense for basic human rights and Democracy as we know it, she said.


Abortion laws around the world

“Our collective fears about the prospects of Roe have been realized. I fear for the future of my young daughters and countless others who could be forced into government-mandated pregnancies.

This is a devastating moment for millions nationwide, but at least New Yorkers can take some solace in the preemptive work of our state legislature to protect reproductive rights in New York.”

“I, and countless women across the nation, are filled with rage, sadness, and fear. Today’s decision out of the Supreme Court is an egregious attack on human rights. This court has made it clear, once again, that the decisions they are handing down are driven by political pressures and are not rooted in established precedent, nullifying decisions that have been made by previous courts for decades. Every American should be outraged—if not for the attack on bodily autonomy and privacy, for the lack of impartiality in our nation’s highest court.”

Senator Brouk went on to say that banning abortion only prevents medically-safe procedures. She argues that those in need of an abortion are put at great physical risk by such a ban.


With Roe overturned, which states are ready to ban abortion?

“Today’s ruling is a vicious, dangerous, and deliberate attack on our most basic freedom as humans. Every single person in this country should have the right to make their own decisions about their own bodies. But make no mistake: We will not go back to the inhumane and restrictive pre-Roe era. Regardless of the situation at the national level, New York will always be a safe haven for anyone seeking an abortion. I will work tirelessly to ensure that low-income New Yorkers and people from hostile states have access to the care they need and deserve. I will always fight to protect our right to make decisions about our own bodies and expand access to this critical and lifesaving care.”

“Every unborn child is precious, extraordinary, and worthy of protection. We applaud this historic ruling, which will save countless innocent lives.

“The Supreme Court is right to return the power to protect the unborn to the people’s elected representatives in Congress and the states. In the days and weeks following this decision, we must work to continue to reject extreme policies that seek to allow late-term abortions and taxpayer dollars to fund these elective procedures.

“The people’s representatives must defend the right to life, liberty, and the pursuit of happiness for every American – born and unborn. As we celebrate today’s decision, we recognize the decades of advocacy from the pro-life movement and we acknowledge much work remains to protect the most vulnerable among us.”

“Today is a dark day for our country. June 24th will long be mourned as the date the U.S. Supreme Court overturned Roe v Wade, the landmark 1973 decision protecting women’s right to choose. This devastating decision takes away the basic constitutional right to make decisions about their own bodies that women in our country have counted on for the past 50 years.”

“This decision will have disastrous consequences as many states move to swiftly ban abortion. Thirteen states already have trigger laws, meaning abortion is immediately banned, and at least that many are poised to take away this fundamental right.”

“Today is a devastating day for all Americans. Today, more than half of the American population became second-class citizens, stripped of their constitutional right to privacy and bodily autonomy, regardless of where they live.

People in as many as 28 states will no longer have the right to control when, under what circumstances and with whom they want to have children. The right-wing justices of the Supreme Court have declared that they are no longer permitted to make decisions about their own bodies, their own families, and their own lives.

Not only is this ruling an insult to women everywhere, but it is an affront to the 6 in 10 Americans who support women’s reproductive freedom.

But while today’s ruling is a terrible setback in the fight for women’s equality, it does not diminish our resolve. In fact, it is time to get to work and fight for our rights. At the federal level Democrats will fight to eliminate the filibuster and enshrine reproductive freedom into law. At the state level we will work to enact pro-choice legislation and flip legislatures to guarantee reproductive rights for all Americans. And in states like New York where reproductive health care is safe and accessible, we will open our doors to those seeking care.

We cannot allow nearly 50 years of progress for women’s rights to be erased in one fell swoop. We have simply come too far to turn back now.”

“The radical activist majority on the Supreme Court is hell-bent on destroying the right to privacy and the freedoms we as a nation are guaranteed by our Constitution. Today’s decision overturning Roe v. Wade is an appalling attack on women’s rights and, sadly, the court has signaled that this is just the beginning of their quest to tear our Constitution apart. Here in New York, we have already acted to protect the right to an abortion, and we will support women from across our nation and continue to do everything possible to protect reproductive choice. We will not be silent – we will fight back against this horrifying decision.”

“I know many Vermonters like me are deeply disappointed following today’s decision by the Supreme Court, as this decision rolls back a federal right that women have had for decades. It’s Important to note, a woman’s right to choose is a principle we will uphold in Vermont, and we, in fact, have prepared for this unfortunate outcome.

“In 2019, I signed a law that affirmed the fundamental rights of all women and ensured reproductive health decisions remain between a woman and her health care provider. That does not change with this ruling.

“Additionally, in November, Vermonters will be able to further solidify this action with a constitutional amendment on the ballot. As I have said, I will be voting for that amendment, and I encourage Vermonters to stand up for the rights of women and do the same.

“Further, I call on Congress to immediately work to codify the right to choose for all Americans as we have done for Vermonters.”


At Pride, celebrations amid a darker national environment

“Today’s abhorrent decision to overturn Roe v. Wade marks a stark new chapter in our American story. We cannot understate the life-altering effect this will have not only on millions of women today, but on the safety and freedom of those for generations to come. We are now living in two Americas, where states must decide if they’ll serve as bastions of freedom, or not. In anticipation of this ruling, we took action to further protect women’s rights to access reproductive healthcare and protect out of state visitors seeking abortion care.

Abortion care is healthcare and it will remain accessible to all who need it in New York. Our safe harbor is ready to welcome those seeking refuge, with the promise that your choices will never be taken away in New York.”

Governor Charlie Baker signed an executive order to protect access to reproductive health care services in the Commonwealth on Friday.

“I am deeply disappointed in today’s decision by the Supreme Court which will have major consequences for women across the country who live in states with limited access to reproductive health care services. The Commonwealth has long been a leader in protecting a woman’s right to choose and access to reproductive health services, while other states have criminalized or otherwise restricted access,” said Governor Charlie Baker. “This executive order will further preserve that right and protect reproductive health care providers who serve out of state residents. In light of the Supreme Court’s ruling overturning Roe v Wade, it is especially important to ensure that Massachusetts providers can continue to provide reproductive health care services without concern that the laws of other states may be used to interfere with those services or sanction them for providing services that are lawful in the Commonwealth.”