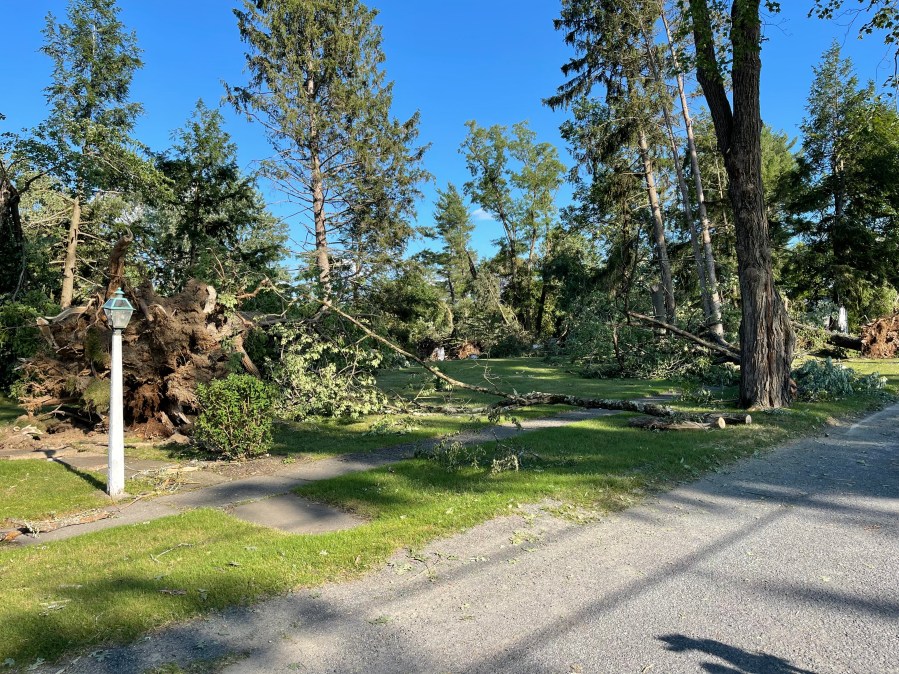 FORT EDWARD, N.Y. (NEWS10) – The National Weather Service in Albany confirmed Wednesday that Tuesday’s severe weather produced a microburst in Fort Edward. Throughout the small neighborhood on Galusha Island, cleanup efforts continued for a second day to clear branches and other debris.

News10 ABC Chief Meteorologist Steve Caporizzo explains why these types of storms can be so dangerous, “You have strong updrafts going into the thunderstorm, and then they get deflected or pushed down, and you have this outflow of very strong winds, in this case 85 miles per hour.”

The storm’s damaging winds brought a large tree down on a house, pinning a woman inside. Authorities say 75-year-old Penelope Perry was taken to Glens Falls Hospital with non-life-threatening injuries after being extricated through the roof.


NH man killed after tree falls on pickup in Lenox

Someone living in the area, who declined to go on camera, told News10 the wind was so strong she was unable to open her door as the storm moved through.

Across the island, there are several other signs of the path the microburst took, including uprooted trees, snapped light poles and damage to a garage door.

The scale of the damage, is indicative of a microburst, “In a microburst, the trees tend to bend or break all facing in the same direction, so that’s how you can tell the difference between tornado damage and microburst damage,” Caporizzo explained.

While the work continues to clear branches, trees and other debris, power has been restored to the area. According to a National Grid spokesperson, there were more than 10,000 outages reported in Eastern New York, with many regaining power either Tuesday night or Wednesday morning.

According to the National Weather Service, the microburst was estimated to be 1.5 miles wide, traveling a mile.

All the information in the report is preliminary and subject to change pending review of the event.