As a general rule of thumb, the prior art disclosure of a chemical species anticipates (and thus renders unpatentable) a chemical genus encompassing that species. The prior art disclosure of a chemical genus, on the other hand, generally does not anticipate a species falling within the scope of the genus – except when it does.  In re Petering, 301 F.2d 681 (C.C.P.A. 1962), decided by the Court of Customs and Patent Appeals (the predecessor of the Federal Circuit) in 1962, provides an example in which the court holds that prior art disclosing a genus of 20 chemical compounds anticipated a species falling within that genus. The Petering court explained that the prior art may be deemed to disclose each member of a genus when, reading the reference, a person of ordinary skill can “at once envisage each member of this limited class.”

Mylan v. Merck provides an example going the other way, with the Federal Circuit affirming a Patent Trial and Appeal Board decision finding that the prior art disclosure of a genus comprising 957 predicted salts did not anticipate the following claim, which recites one of those salts. 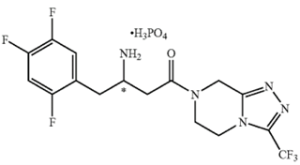 or a hydrate thereof.

The claimed salt is sitagliptin dihydrogenphosphate (“sitagliptin DHP”), a dipeptidyl peptidase-IV (“DP-IV”) inhibitor and the active ingredient in JANUVIA, which is marketed by Merck for the treatment of non-insulin-dependent (i.e., Type 2) diabetes.  Mylan petitioned for inter partes review (IPR) of a number of patent claims of U.S. Patent 7,326,708 (the “’708 patent”), including the independent claim presented above, as part of its bid to bring a generic version of JANUVIA to market prior to expiration of the patent. Mylan argued that the challenged claims were anticipated and/or rendered obvious by the disclosure of the genus of 957 salts in an earlier Merck-owned U.S. patent and its equivalent International Patent Publication (referred to collectively as “Edmondson”).

In particular, Mylan argued that under In re Petering Edmondson’s disclosure of the genus anticipated the challenged claims because a skilled artisan reading Edmondson would “at once envisage” the sitagliptin DHP salt. But the Board rejected this argument, finding that none of the challenged claims were anticipated by Edmondson. The Federal Circuit affirmed, finding that while In re Petering does stand for the proposition that a skilled artisan may “at once envisage each member of [a] limited class,” the “key term” in this statement is the word “limited.”  The court found that the genus of 957 salts disclosed in Edmondson is a far cry from the 20 compounds “envisaged” by the narrow genus in Petering.

The Federal Circuit went on to explain:

We cannot provide a specific number defining a “limited class.” It depends on the “class.” But we agree with Merck and hold that the Board did not err in finding that a class of 957 predicted salts[, as disclosed in Edmondson,] is insufficient to meet the “at once envisage” standard set forth in Petering.

The manner in which Edmondson discloses the genus probably had some bearing on the outcome. Edmondson does not explicitly define a genus of 957 salts. Instead, Edmondson discloses a list of 33 compounds, one of which was sitagliptin.  It also discloses eight “preferred salts,” one of which was phosphate, the salt used in sitagliptin DHP.  The product of multiplying 33 x 8 is 264, so there are at least 264 possible combinations of the 33 chemical compounds with the eight salts. But there are also possible differences in stoichiometry, i.e., the ratio of the salt’s ions. For example, the stoichiometry of the claimed sitagliptin DHP is 1:1, i.e., a 1-to-1 ratio of sitagliptin to phosphate.  However, other stoichiometry’s are possible.  For example, Merck was also able to prepare sitagliptin phosphates having stoichiometries of 3:2 and 2:1. Taking into account the various possible stoichiometries, the court accepted Merck’s representation that the 33 compounds could potentially be formulated into a total of 957 different salt forms using the eight preferred salts.

Of course, the fact that Edmondson does not anticipate the claims does not necessarily mean that it would not render them obvious, particularly in combination with other prior art references. In this case, however, Edmondson could not be used as a prior art reference for purposes of obviousness with respect to a number of the claims at issue in the IPR, including Claim 1. In a nutshell, the reason for this was that under pre-AIA 35 U.S.C. 103(c)(1) Edmondson could not be used as 102(e)/103 prior art because Edmondson and the challenged patent were both owned by Merck, and Merck was able to antedate Edmondson as a 102(a)/103 reference with respect to Claim 1 and some of the other claims at issue.

Merck was not able to antedate Edmondson with respect to some of the other challenged claims, including Claim 4, which depends from Claim 1 and recites a crystalline monohydrate form of the (R)-enantiomer of sitagliptin DHP.  I think it is safe to assume that Claim 4 corresponds to the proposed generic product, given that in Canadian proceedings (discussed below) Mylan stipulated that its product would infringe the Canadian equivalent of Claim 4. The Board addressed the merits of Mylan’s assertion that Edmondson (in combination with other prior art) rendered Claim 4 obvious, and concluded that it did not. The Federal Circuit affirmed this conclusion.

This past April, a Canadian court issued a decision finding the Canadian equivalent of Claim 4 not invalid for obviousness and/or insufficiency (i.e., lack of enablement).  Significantly, the Canadian Court found that “[t]he evidence indicates that the [skilled artisan] would not have any specific motivation arising from [Edmondson] to focus on the particular crystalline form of a salt of sitagliptin over the other compounds disclosed within [Edmondson].”

Last month, Merck announced that the U.S. District Court for the Northern District of West Virginia had found the ‘708 patent not invalid and infringed in a Hatch-Waxman infringement suit brought against Mylan (which is now a part of Viatris).  I tried to take a look at that decision, but found that it had been filed under seal.  The case is being appealed to the Federal Circuit, and it will be interesting to see what happens if that appeal results in a decision.  Bear in mind that in patent infringement litigation the accused infringer (e.g., Mylan) is able to rely on prior art (e.g., public use or on-sale events) and grounds for invalidation (e.g., obviousness-type double patenting or lack of enablement) that are not available in IPR proceedings.

More on the Patent Attorney Rolls

Firms with the Most Patent Attorneys and Agents

Buyers Guide for your Patent Attorney