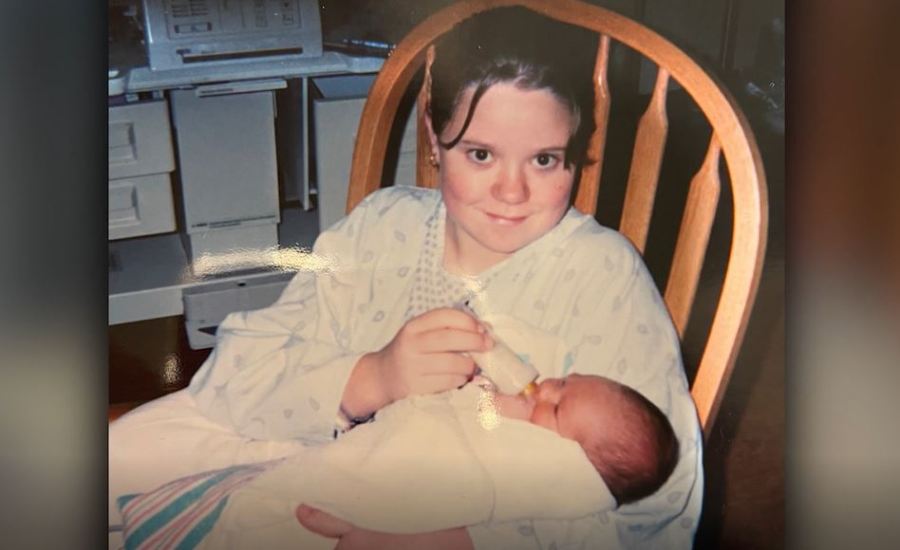 (NewsNation) — After 20 years apart, a Utah mother has been reunited with her biological son. Holly Shearer was only 15 when she became pregnant with a baby Benjamin. Shearer made the tough decision to place the baby up for adoption.

Shearer picked Brian and Angela Hulleburg, a couple who struggled with infertility, to raise baby Benjamin. Adopted mom Angela Hulleburg said she stayed in touch with Shearer by writing her letters about Benjamin and sending pictures of him for the first three years of his life.

“After that, we kind of didn’t have any contact,” Angela Hulleburg said. “But we had been very open with Benjamin that he was adopted and that when the time was right, when he was older, we would definitely find her and reconnect with her again, for sure.”

Benjamin Hulleburg added, “We were planning on trying to find her when I first turned 18, but then COVID hit. We couldn’t get ahold of anybody, so it was kind of a lost cause and we were going to have to wait a couple of more years after that.”

In the meantime, he started his own search, seeking to reconnect with Shearer and find the little piece of himself he said was missing. He took a DNA test and signed up with an adoption registry. “I had never had somebody that I can say, ‘That’s where I got my eyes from. That’s where I got my nose.’ I never had that physical biological connection to say, ‘This is who I am and this is where it came from,’” he said. “It was a lot less about trying to find a family or trying to find a long-lost family member. But it was more about trying to find where I came from.”

The traits they share are more than just physical. After meeting again two decades later, they discovered they work in the same place. Benjamin volunteers at St. Mark’s Hospital in Millcreek, Utah, and Shearer works near the women’s pavilion.

Benjamin has very vivid memories of the first time he received a message from his biological mother. “I had been trying for so long to find Holly, and I had never had success,” he remembered.

The day after his birthday, he was sifting through some messages of people wishing him a happy birthday when he noticed one message from a person he didn’t know. He replied by asking how he knew the sender, thinking it may just be a friend from a Facebook group.

“That’s when she sent me a long message telling me who she was,” he said. “When I got the message, I broke down. I started crying. I had to go to the break room. It was a big deal. It hit me really hard. It was a day I had been waiting for my entire life.”


Georgia mom arrives in Queens to reunite with missing son

He said that throughout his childhood, he had always wanted to meet his biological mother, and all he knew about her was her first name. Finally meeting her was something worth waiting for, he said. “To have this day finally come, it was like something that I had worked up to for so long that had finally happened. That it was like the end of a long, hard journey, and I finally made it,” he said.

The feeling of a long and difficult journey is mutual for his mother. Shearer described putting her son up for adoption as the hardest decision she’s ever made. “Not a day went by that I didn’t think about him. Just in any scenario,” she said. “It’s a beautiful day, school, a Monday morning. I wonder what he’s doing for holidays, birthdays? He was always on my mind.”

Benjamin isn’t sure what the future looks like but feels good knowing he now has double the love and support. “This came at the exact time in my life where I needed it. So when I think of the future, I think it’s going to happen, how it happens,” he said. “But I have twice the love, I have twice the support, and I almost feel like I can do anything no matter what comes my way.”