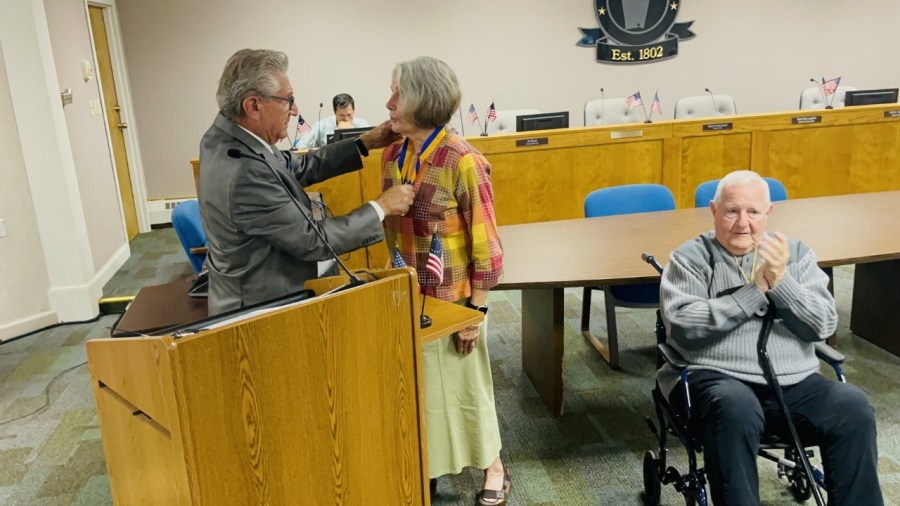 Lt. Helene Wallingford served five years of active duty in the U.S. Navy from 1965-1970 as a nurse providing healing care for injured and wounded American service members during the height of the Vietnam War. During this time, Helene’s future husband, U.S. Marine Corps Captain David Wallingford, was shot and wounded in Vietnam and was evacuated to a military hospital in Yokosuka, Japan, where he met and was treated by Helene, who was stationed there.

For Helene’s courageous service and efforts to save lives and heal others during the Vietnam War, she was awarded the National Defense Service Medal and Navy Commendation. After Helene’s military service, she worked as a nurse at St. Peter’s Hospital and Saratoga Hospital and went on to advise and educate many nursing students at Maria College and the Excelsior College Nursing Program. She also has given back to her fellow nurses as the Past President of Sigma Theta Tau International.

Helene and David married and moved to Malta where they raised four children and are now the proud grandparents of eight grandchildren.

“There are many veterans who would not be alive today if it was not for U.S. Navy veteran Lt. Helene Wallingford and the other nurses who served who were there to provide compassionate care for our wounded warriors and truly saved lives during the Vietnam War. Talk about a storybook romance, Helene and David Wallingford met while she treated him for wounds he sustained in combat during the Vietnam War. They fell in love, got married and raised a family. I’m proud to recognize Lt. Helene Wallingford with the Senate’s highest honor, the Liberty Medal, and salute both her service to our country and that of her husband, David, who I previously honored with the Liberty Medal,” said Senator Jim Tedisco.