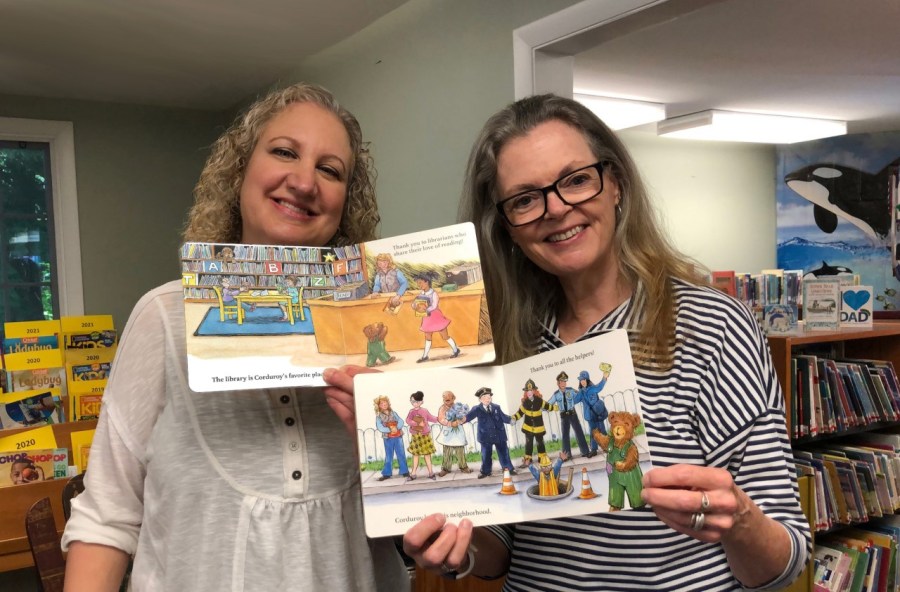 BALLSTON SPA, N.Y. (NEWS10) – Nationally-acclaimed children’s book illustrator Jody Wheeler’s lifetime love of literature can be traced back to her girlhood in Ballston Spa, where she spent countless hours exploring titles found on the shelves of her hometown’s public library. So it wasn’t surprising that when it came to choosing a “model” librarian for Corduroy’s Neighborhood, based on the beloved teddy bear character created by the late Don Freeman, Wheeler chose the village’s longtime Chief Librarian Andrea Simmons.

A self-proclaimed “City Mouse, Country Mouse” who divides her time between home-based studios in Ballston Spa and Manhattan, Wheeler starts each new project in the Corduroy the Bear series by receiving artwork suggestions for each page from her editors at Viking.

The Ballston Spa High School Class of 1970 alum next embarks on a quest that includes drawing inspiration from real-life faces and places. Creating renderings based on people and locations dear to her heart further assists Wheeler in bringing editorial suggestions to life.

“Since I worked on Corduroy’s Neighborhood while in Ballston Spa, it seemed a great idea to use our library where Andrea Simmons does such an outstanding job at the helm as the setting for the library spread. Andrea and her staff have created a great children’s book area there. It’s a wonderful environment and resource for the whole community. The fun part of the creative process was capturing Andrea’s joyful spirit,” notes Wheeler, whose portfolio includes illustrations in more than 80 additional books for young readers.

Simmons, a second-generation librarian who next year will celebrate 20 years directing the Ballston Spa Public Library, said it was an honor to be chosen as a model for one of the smiling faces inside the covers of Corduroy’s Neighborhood.


The history of the Old Iron Spring in Ballston Spa

“I wasn’t sure just what to expect when Jody asked me to share a photo of myself to be used in conjunction with this literary project, but I’ve long been a fan of her artwork as well as being grateful for the many books Jody has donated to our library system so wanted to help in any way possible,” recalls Simmons, who was just 16 when she began working in a library in the early 1990s. (At the time her now retired mother Lynn Berman was a librarian in Syracuse.) “Like my mom, I absolutely love being a librarian and I’m so glad that how I feel about my profession comes through in Jody’s artistic renderings of me,” says Simmons.

If the face of another character inside the covers of Corduroy’s Neighborhood looks familiar to some readers, it’s because the drawings were based on photos of a firefighter whom Wheeler admired during her formative years in Ballston Spa.

“I grew up next door to the Groom family on Pinewood Lane, near Rowland Street. Bud’s grandfather founded the Star Fire Co. in 1901 that later became the Union Fire Company. Bud’s father as well as Bud and his brother Bill ultimately also served with distinction as full-time members of the Union Volunteer Fire Co. It was great to see Bud in his uniform and exciting to see the trucks zooming by as we young adventure-loving Pinewood Lane Gang members ran to the top of the street to watch them respond to nearby fire calls,” remembers Wheeler.

Thanks to generous donations from Wheeler, copies of Corduroy’s Neighborhood are available on loan for free from the Southern Adirondack Library System. Those who would like to own copies for their personal libraries may purchase them from Northshire Books in Saratoga Springs or on Amazon.