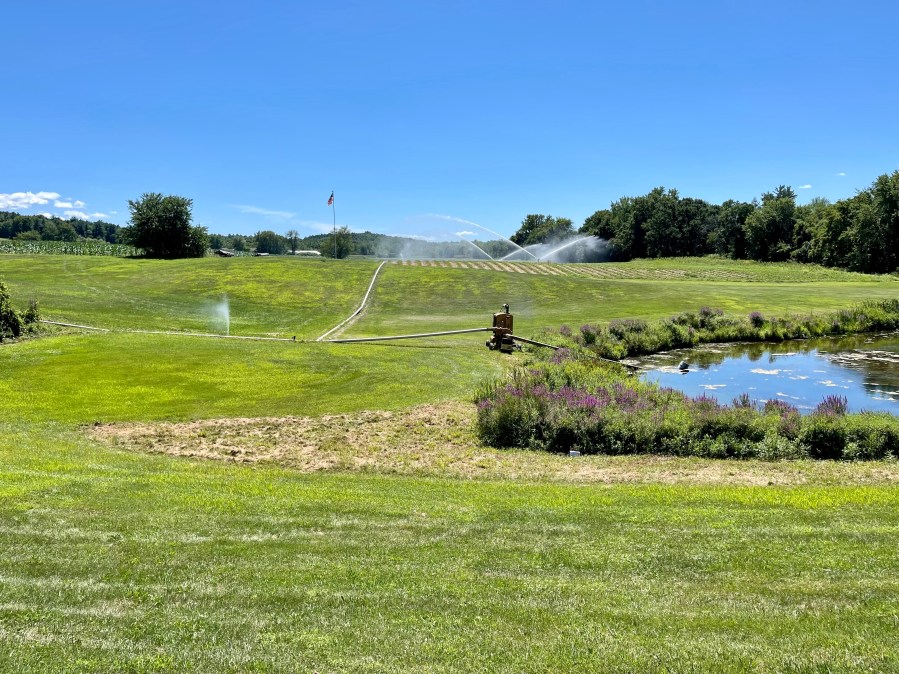 CASTLETON-ON-HUDSON, N.Y. (NEWS10) – As this summer’s dry weather continues, farmers across the Capital Region have had to make adjustments to continue growing in drier soil. At Swartz Farm in Castleton, the irrigation system was running again Friday afternoon, something that’s been a common sight all season.

“It’s everything. There’s no way we could grow those strawberries and those pumpkins over there if we weren’t able to irrigate them adequately,” said Mike Swartz, one of the partners at the multi-generational family farm.

The effects of the irrigation can be seen in different areas of the farm. Corn in areas of a field that’s seen more water tower over stalks in other, drier parts of the same field.

But using the irrigation system comes at a cost, “It’s about, we figure about $150 to $200 worth of fuel a day to run that pump,” Swartz said.

The pump, which runs on what continues to be expensive diesel fuel, has been consistently running throughout the summer as dry conditions persist.

According to the U.S. Drought Monitor, most of the Capital Region is either abnormally dry or in a moderate drought. Other areas of the state, including parts of New York City, as well as Dutchess, Putnam and Orange counties are seeing severe drought.

But it’s not just a lack of rainfall farmers like Swartz have contended with this summer. The Capital Region has seen two separate heat waves, with temperatures consistently over 90°, in recent weeks.

“Our pumpkins right now are in a stage of development where they’re pushing blossoms out, which are then going to develop into pumpkins. If they get hit with too much heat for too long, the blossoms will just decay and drop off, and you won’t get pumpkins there anymore,” Swartz explained.

But some relief is hopefully on the way next week, both in terms of cooler temperatures and rain chances, “You just kinda wait and see, whatever happens will happen and then you try to not get too upset about it,” the farmer said.

And even when the rain does finally come, farmers prefer a soaking rain, rather than a stray strong thunderstorm.

“When the ground is so hard from lack of water all summer, when that driving rain hits the ground, a lot of it will tend to just run off,” says Swartz.

Despite these challenges, he says it’s too early to tell what this year’s harvest will be like, explaining that it’s difficult to know until they’re out in the fields.

While some crops have needed consistent irrigation at the farm this summer, a field full of beans has been thriving without it. Last summer brought the opposite challenge, with some vegetables struggling to grow amidst consistent rainy weather.