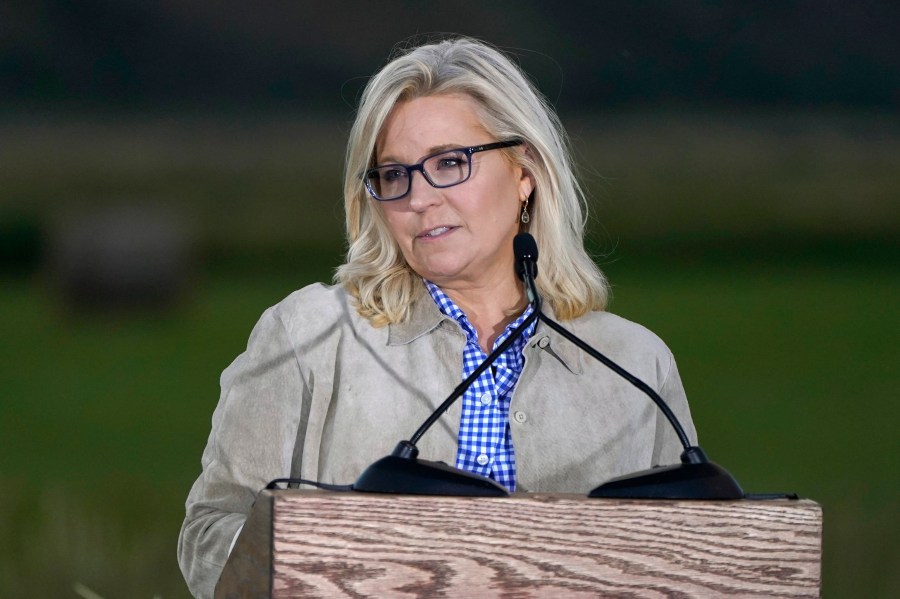 WASHINGTON (The Hill) — Rep. Liz Cheney (R-Wyo.) is fueling 2024 speculation after saying she was “thinking about” a presidential run in the wake of her primary loss on Tuesday night. But even as the three-term congresswoman confirmed what she has spent months dodging, she offered no further hints at what that run might look like—beyond vowing to continue battling former President Donald Trump.

She lost her primary on Tuesday in a landslide to a Trump-backed challenger, making it hard to believe that she would win much support in a Republican presidential contest. Regardless, Cheney’s ultimate decision has the potential to scramble the political landscape in 2024 and complicate things for other prospective presidential contenders, including Trump and President Joe Biden.

Most strategists agree that the conservative scion of former Vice President Dick Cheney has little shot at winning the White House in 2024. So how she impacts the race could depend on how she chooses to run.

“Her running for president is a joke. She would get almost nothing in a Republican primary,” Keith Naughton, a veteran Republican strategist, said. “The only thing that she would do if she ran as a Republican is help throw the nomination to Trump by taking up some protest votes that could go to [Florida Gov. Ron] DeSantis or [former Vice President Mike] Pence.”

Gunner Ramer, the political director of the anti-Trump Republican Accountability PAC, acknowledged the uphill battle Cheney would likely face in a GOP presidential primary, saying that it’s clear that Republican voters remain firmly aligned with Trump and his wing of the party. “The Republican primary voters, a lot of them are galvanized for the America First, MAGA agenda that Donald Trump represents,” he said, using an acronym for “make America great again,” one of Trump’s oft-used political slogans.

Cheney also hasn’t ruled out the possibility of running as an independent, telling Politico on Wednesday that she’s “not at all focused” on such specifics. Of course, such a move wouldn’t be unthinkable; she’s increasingly at odds with much of her party and polling shows her with little support among Republican voters.

Ramer said Cheney could have an impact on the 2024 presidential contest, regardless of what political label she runs under. He pointed specifically to her work on the House select committee charged with investigating the Jan. 6, 2021, riot at the U.S. Capitol as a potent weapon in her political arsenal that could be used to weaken Trump, or at least remind voters of the drama that defined his time in the Oval Office.

“The one thing she has made very clear over and over again is that she is determined to stop Donald Trump from ever holding power again,” Ramer said. “In the short term, her work on the Jan. 6 committee and prosecuting the case against Donald Trump and his leadership and those who enabled him is going to be a top priority for her.” He added, “The second step is going to be, if she runs in 2024, having a clear voice as a Republican constantly beating up on Donald Trump and his lies.”

But one Republican strategist who has worked on White House campaigns cautioned that an independent presidential bid by Cheney could carry implications for Biden, as well. The strategist noted that, in the last presidential election, Biden benefited in part from the support of right-leaning independents and moderate Republican voters who crossed ideological boundaries out of frustration with Trump.


Dick Cheney in new ad: No individual is ‘greater threat to our Republic’ than Trump

“You get someone like Cheney running as a more typical conservative and I think she pulls some votes away from Biden,” the strategist said. “Maybe it doesn’t make a difference, but in a close race between Trump and Biden, it could end up mattering a lot.”

Beyond that, however, Cheney’s constituency is unclear, the strategist said, noting that she’s isolated most Republicans with her criticism of Trump, while her politics are still too conservative for her to attract significant support among even centrist Democrats.

“I think the big question she needs to consider is: who’s her constituency?” the strategist said. “When you have most Republicans out there saying that they either want Donald Trump to run again or that they’re interested in DeSantis, a Trump loyalist, where is Cheney’s path?”


Trump set for controversial return to DC as 2024 bid looms

Of course, there are still plenty of open questions about the 2024 presidential contest. While Trump has openly floated a potential comeback bid, it’s also possible that he opts against another run. Not only is he immersed in a series of swirling legal scandals, but there are a handful of other ambitious Republicans who are believed to be eyeing campaigns of their own. Trump remains the current favorite to win the 2024 GOP nomination, though DeSantis has been gaining ground in early polling.

And despite Biden’s insistence that he plans on seeking a second term in the Oval Office, Democratic voters have become increasingly eager for new leadership in recent months. A CNN poll released late last month found that 75% of Democrats and Democratic-leaning voters want the party to nominate someone else for the White House in 2024—though the effect Democrats’ recent legislative victories will have on those numbers remains to be seen.

Cheney, meanwhile, will face a test of her own in the coming years: whether she can remain a relevant political force in her post-congressional life. In one sign that she’s already putting together a strategy, Cheney has already converted her campaign committee into a leadership PAC focused on educating “the American people about the ongoing threat to our Republic, and to mobilize a unified effort to oppose any Donald Trump campaign for president,” Jeremy Adler, a spokesperson for Cheney, said.

That group is expected to serve as Cheney’s primary political vehicle moving forward and could allow her to stay in the public arena as she weighs whether to seek the 2024 Republican presidential nomination. News of Cheney’s new political project was first reported on Wednesday by Politico.


Ex-Trump counsel gears up for starring appearance in Jan. 6 hearing

To be sure, there’s still skepticism about Cheney’s efforts, even among her defenders. Ramer, the Republican Accountability PAC political director, openly questioned what “a Liz Cheney constituency” looks like, acknowledging that there’s no guarantee that she can significantly alter the course of the 2024 election.

Still, he said he expects her to stick around, at least for the time being. “This isn’t the end of Liz Cheney,” Ramer said. “The one thing she has made very clear over and over again is that she is determined to stop Donald Trump from ever holding power again.”