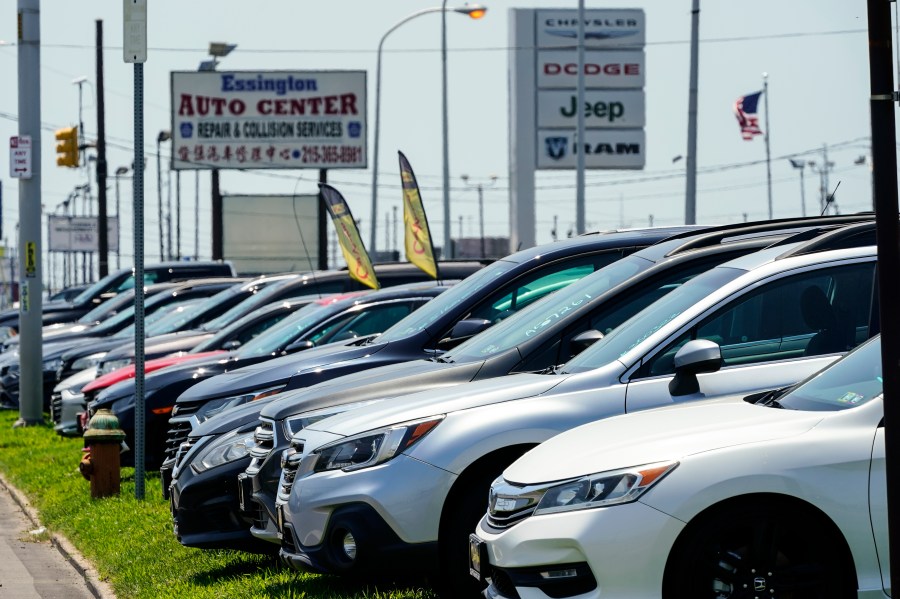 WASHINGTON (AP) — Surging prices for gas, food, and rent catapulted U.S. inflation to a new four-decade peak in June, further pressuring households and likely sealing the case for another large interest rate hike by the Federal Reserve, with higher borrowing costs to follow.

Consumer prices soared 9.1% compared with a year earlier, the government said Wednesday, the biggest yearly increase since 1981, and up from an 8.6% jump in May. On a monthly basis, prices rose 1.3% from May to June, another substantial increase, after prices had jumped 1% from April to May.

The ongoing price increases underscore the brutal impact that inflation has inflicted on many families, with the costs of necessities, in particular, rising much faster than average incomes. Lower-income and Black and Hispanic Americans have been hit especially hard because a disproportionate share of their income goes toward such essentials as housing, transportation, and food.


Did corporate greed cause inflation?

Excluding the volatile food and energy categories, so-called core prices rose 0.7% from May to June, the biggest such increase in a year. And compared with 12 months earlier, core prices jumped 5.9% in June, down from a recent year-over-year high of 6.4% in March but still exceedingly high.

Some economists have held out hope that inflation might be reaching or nearing a short-term peak. Gas prices, for example, have fallen from the eye-watering $5 a gallon reached in mid-June to an average of $4.63 nationwide Wednesday—still far higher than a year ago but a drop that could help slow inflation for July and possibly August.

In addition, shipping costs and commodity prices have begun to fall. Pay increases have slowed. And surveys show that Americans’ expectations for inflation over the long run have eased—a trend that often points to more moderate price increases over time.

Still, the breadth of the price gains shows how rising costs have seeped into nearly every corner of the economy. Grocery prices have jumped 12.2% compared with a year ago, the steepest such climb since 1979. Rents have risen 5.8%, the most since 1986. New car prices have increased 11.4% from a year earlier. And airline fares, one of the few items to post a price decline in June, are nevertheless up 34% from a year earlier. From May to June, the cost of dental services surged 1.9%, the biggest one-month increase since record-keeping began in 1995.

The spike in inflation has diminished consumers’ confidence in the economy, sent President Joe Biden’s approval ratings tumbling, and posed a major political threat to Democrats in the November congressional elections. Forty percent of adults said in a June AP-NORC poll that they thought tackling inflation should be a top government priority this year, up from just 14% who said so in December.

The inflation surge first erupted in the immediate aftermath of the 2020 pandemic recession. As Americans channeled their spending toward items for the home, like furniture, appliances, and exercise equipment, supply chains became overwhelmed and prices for physical goods soared. But as consumer spending has gradually shifted away from goods and toward services like vacation travel, restaurants meals, movies, concerts, and sporting events, some of the highest price increases have occurred in services.

Housing costs have also risen sharply. A shortage of houses for sale has kept prices high just as mortgage rates have also soared. With many people priced out of the market for houses and looking instead to rent, demand for apartments has sent rental rates beyond affordable levels. The average cost of new leases has jumped 14% in the past year, according to real estate brokerage Redfin, to an average of $2,016 a month.

The persistence of high inflation has unnerved Chair Jerome Powell and other Fed officials, who are engaged in the fastest series of rate hikes since the late 1980s to try to slow the price spikes. The central bank is expected to raise its key short-term rate later this month by a hefty three-quarters of a point, as it did last month, with potentially more large rate hikes to follow.

Powell has stressed that the central bank wants to see “compelling evidence” that inflation is slowing before it would dial back its rate hikes. Such evidence would need to be a “series of declining monthly inflation readings,” Powell said at a news conference last month.

Many economists worry that the Fed’s drive to quell inflation will cause it to tighten credit too aggressively even while the economy, by some measures, is slowing. Much higher borrowing costs could trigger a recession, potentially by next year.

Consumers have started to pull back on spending, home sales are falling as mortgage rates rise and factory output slipped in May. Yet steadily robust job growth points to an economy that is still expanding, with little sign of an imminent recession.


Lawmakers play blame game on inflation as they search for solutions

Though inflation may slow later this year, it’s not clear by how much. Oil prices fell Tuesday to about $96 a barrel. And other commodities, including metals such as copper, have also become less expensive, mostly because of recession fears in both the U.S. and Europe.

With fewer ships stuck at the Port of Los Angeles and Long Beach, America’s largest, shipping costs for international freight have fallen. Wholesale gas prices have fallen to about $3.40 a gallon, which suggests that retail prices could drop to as low as $4.20 by August. And wholesale used car prices are also falling, which points to declining used car prices in the coming months.

Inflation has spiked overseas as well. It reached 9.1% in the U.K. in May, the highest level in four decades, driven mostly by higher gas and food prices. Annual inflation in the eurozone’s 19 countries hit 8.6% in June, surging past the 8.1% recorded in May. Inflation is now at its highest level since recordkeeping for the euro began in 1997.