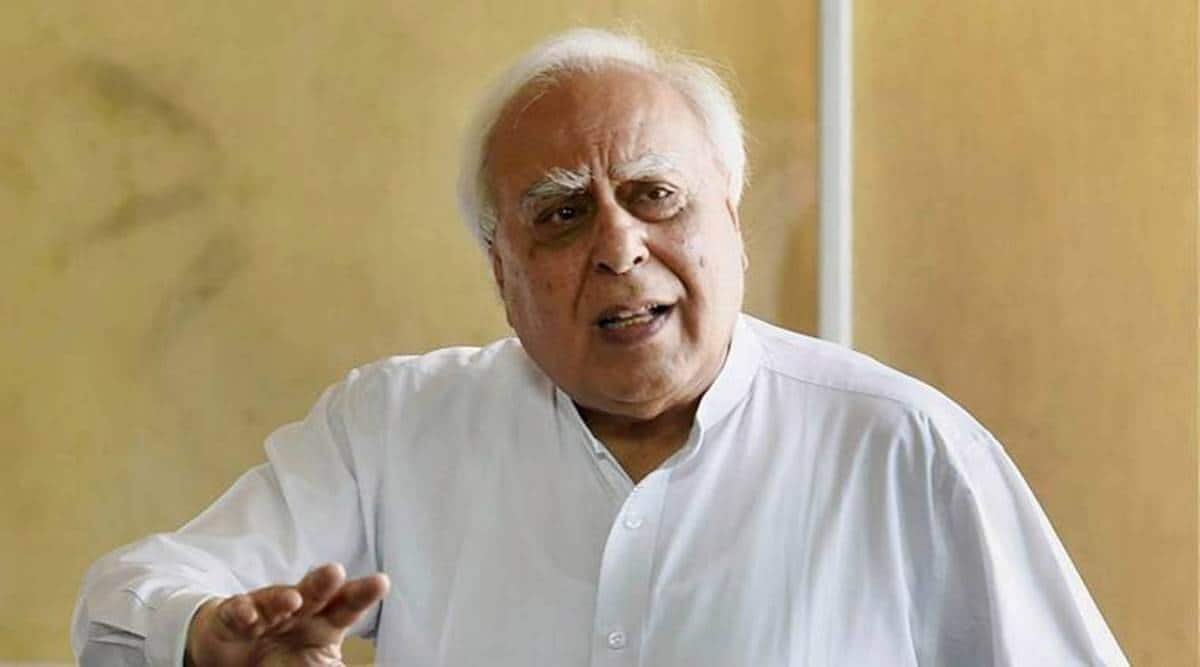 Expressing concern over the current state of the judiciary, Rajya Sabha MP and senior advocate Kapil Sibal on Sunday said some members of the institution have “let us down” and “I hang my head in shame” for what has happened in the recent past. In an interview with PTI, Sibal also said that in recent years, free speech, and how it has been interpreted by the Supreme Court, unfortunately, is not allowed the space that is constitutionally permissible to it.

Attacking the BJP-led government at the Centre, he said there is a “de facto emergency” in place with “throttling” of institutions. The rule of law is “infringed” on a daily basis, he alleged. Sibal also said the present dispensation wants an ‘Opposition-mukt Bharat’ not just a ‘Congress-mukt Bharat’. Asked about the arrest of Alt News co-founder Mohammed Zubair, Sibal said that the more worrying larger issue was that some members of the judiciary have “let us down”. “Some members of the institution (judiciary) of which I have been a part for 50 years have let us down. I hang my head in shame that this has happened. When the judiciary turns a blind eye to ex facie violations of the rule of law one wonders why an institution designed to protect the rule of law allows the rule of law to be infringed with open eyes,” Sibal told PTI over phone from the UK.

Talking about the arrest of Zubair and the denial of bail to him by a Delhi court, he said that for a tweet four years ago without any communal outcome, it is “unthinkable” for that person to have been arrested.” More than that, now having realised that the arrest cannot possibly be sustained, the investigating agency is looking for other matters which have nothing to do with the original arrest. Clearly what we are witnessing is a mala fide arrest and a subsequent fishing inquiry,” Sibal said. What the investigating agencies now do is to arrest a person, then start investigating as to what he might have violated. For that they seek access to other records and then come back to court to allege commission of other offences in an attempt to deny bail to the accused, he charged.

Asked about the criticism from certain quarters of the Supreme Court ruling in the Zakia Jafri case in which the top court upheld the SIT’s clean chit to the then Gujarat chief minister Narendra Modi and 63 others in the 2002 communal riots matter, Sibal said since he was a lawyer for Jafri it was not proper for him to comment at this stage. “But I can say this to you that we have seen in the recent past, judges rendering findings on matters that were not argued before them, judges rendering findings in matters which are not appealed against and some judges disregarding patent illegalities and upholding executive actions that are indefensible,” Sibal said .”I don’t want to make a comment on any particular case but as I said having been a part of this institution, for what has happened in the recent past, I hang my head in shame,” he said.

On the UN Human Rights office expressing concern over the arrest of Zubair and activist-lawyer Teesta Setalvad, Sibal said “undoubtedly” India’s image was being affected internationally but asserted that people must rely on courts in India to protect human rights. “Our people in the profession, people who are part of the institution, including judges who are wedded to the rule of law, it is time for all of us to speak frankly, openly and without fear about the state of affairs prevailing today,” he said. Referring to Nupur Sharma’s controversial remarks on Prophet Mohammad, Sibal said this is the result of the culture of intolerance and hatred that has crept into our national discourse.

“All this is happening, why, because hate has become an instrument for electoral gain. If hate becomes part of a political strategy to divide society to win elections then you will have many such instances including the one that just happened in Udaipur where a tailor was beheaded. These unacceptable inhuman and ghastly acts are the result of an agenda which targets communities; an agenda which divides rather than unites,” he said. On the BJP’s recent critical comments on the Emergency imposed in 1975 by the then Indira Gandhi government, Sibal said Emergency was declared by virtue of powers that were provided for in the Constitution. “That particular act of declaration of emergency was unfortunately held to be valid by the Supreme Court. This only shows that courts are not infallible. We would like to forget that ‘black day’ when that judgement was rendered,” said the former Union minister, who recently quit the Congress. Sibal said today the situation is much worse because, without the authority of law, there is a “de facto emergency”. “What we are witnessing is the de facto throttling of all institutions which are designed under the Constitution to protect it. With the executive capturing almost all such institutions what prevails is a de facto emergency wherein the rule of law is infringed on a daily basis,” he said.

Sibal, who is set to start a fresh term after being elected unopposed to Rajya Sabha from Uttar Pradesh as an Independent with the support of the Samajwadi Party, asserted that the opposition has no choice but to stand united. “You are seeing that playing out ever since a duly elected government was toppled in Uttarakhand. Thereafter, we saw it toppled in Arunachal Pradesh, absent majority was installed in Goa and Manipur, again governments toppled in Karnataka, Madhya Pradesh, and now Maharashtra,” he said. Elected governments are being toppled by subverting electoral verdicts and by the misuse of the Tenth Schedule by means that are obviously foul, he said. This means that this present government doesn’t just want a “Congress-mukt Bharat but an Opposition-mukt Bharat”, Sibal asserted. Talking about his fresh term in Rajya Sabha, Sibal said he is looking forward to it. “I want to be the independent voice when the voices of others are being silenced,” he said.