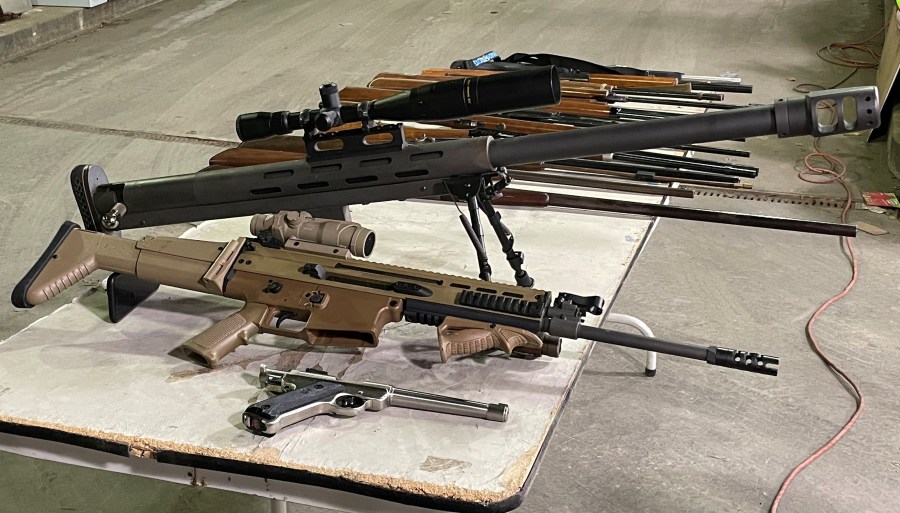 HOLYOKE, Mass. (WWLP) — A man from Holyoke was arrested Friday for illegally possessing machine guns, unregistered firearms, and making false statements. According to the Justice Department in Boston, Daniel A. Augusto, 56, was indicted in Springfield on unlawful possession of machine guns, six counts of unlawful possession of unregistered firearms, and making false statements to federal agents.

22News first reported on February 23 that several ATF and FBI agents were investigating a home at 5 Robert Dr. in Holyoke and the homeowner, Augusto, was taken in for questioning. He was arrested Friday for allegedly illegally possessing multiple unregistered firearms, magazines and silencers, including more than 40 conversion devices and forced reset triggers that are classified as machine guns under federal law.

The indictment includes that Augusto falsely stated to federal agents that all of the firearms in his residence belonged to his son and his girlfriend and that he never asked his son or his girlfriend to purchase firearms.

The conversion devices and forced reset triggers found in the home were the following:

He is scheduled to be in federal court in Springfield Friday afternoon.

“Guns are deadly weapons. There are strict requirements regarding licensing for and registering of firearms. We believe Mr. Augusto not only unlawfully possessed numerous unregistered firearms, but also possessed a stockpile of machineguns and conversion devices that have the capability to rapidly cause death and destruction,” said United States Attorney Rachael S. Rollins. “The illegal possession of firearms and, moreover, machineguns, greatly threaten the safety of our communities. Gun laws are in place for a reason. The conduct alleged here is very serious. My office will continue to work with our law enforcement partners to identify and prosecute individuals who try to bring deadly weapons into our communities.”

“The unlawful possession of unregistered machineguns is a federal crime that ATF takes very seriously as it threatens the safety of our communities,” said James M. Ferguson, Special Agent in Charge of the Bureau of Alcohol, Tobacco, Firearms, and Explosives, Boston Field Division. “ATF has had a long and productive relationship with our local, state, and federal law enforcement partners in combating violent crime and stopping the unlawful possession of firearms that are not legally registered.”

Rotterdam food truck event to support those with disabilities