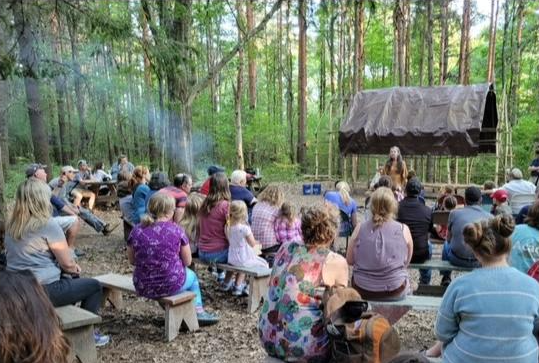 ALTAMONT, N.Y. (NEWS10) – Heldeberg Workshop was awarded an $8,000 grant on Wednesday by the Preservation League of New York State. The grant will be used to fund a Historic Landscape Report of the property from 1750 to the present day.

“This report will shed light on the history of life beneath the Heldeberg Escarpment,” said Dorothy Matthews, the Workshop’s Development Committee Chair. “That knowledge will enrich our classes and generate interest among amateur and professional historians and archaeologists.”

The Heldeberg Workshop property contains foundations of a pre-1767 homestead and a possible barn, a well, remains of an abandoned road, and an 1850s-era cemetery. A rebel Tory attack occurred at the homestead in 1779. This resulted in a visit to the property by patriot commissioners for Detecting and Defeating Conspiracies, a legal body formed in Albany in 1779 to ferret out traitors to the American cause. It is also the site of a farm owned by Captain Henry Crounse, a Civil War Army officer.

Since 1993, Preserve New York has been providing funds to municipalities and nonprofit organizations that need technical, and professional assistance to guide a variety of preservation projects. The historic structure reports, building condition reports, cultural landscape reports, and cultural resource surveys funded through this program lead to positive outcomes across New York’s 62 counties.

Founded in 1961 and well known for its summer program, Heldeberg Workshop’s mission is to promote understanding, appreciation, and respect for our environment, heritage, and country. Over a six-week period, 1200 Capital Region students participate in more than 100 non-traditional classes such as fossil hunting, blacksmithing, and weaving, taught by professional instructors, artisans, and subject matter experts.

Classrooms include 32 lean-tos, a large multi-unit pavilion, a Theater Building and outdoor stage, a working Blacksmith Shop, an Archery Building, a Puppet Stage, and a half-size Iroquois Longhouse and a tepee. The 237 acres that make up the property include 20 miles of hiking trails, a pond, a wetland, a waterfall, meadows, and the slope of the escarpment, providing access to diverse ecological and geological sources.

“The projects funded by Preserve New York exemplify the excellent preservation planning work being done throughout our state,” said Katie Comeau, Vice President for Policy and Preservation and the Preservation League. “The League is grateful to our program partners at NYSCA and the Gardiner Foundation for their support for Preserve New York. With each of these grants, a meaningful historic place takes a significant step toward a more secure future, and we are pleased to be working with such dedicated project sponsors to make this work possible.”

Located at 353 Picard Road in Altamont, Heldeberg Workshop also offers weekend classes to children, adults, and families in the fall and spring months, and supports the use of the property by area scouting and 4H groups, environmental and historical organizations, college classes and students working on independent research projects. A Sugar Shack is currently under construction, and when completed will be used to demonstrate to the community how maple syrup is made using the workshop’s own maple trees.