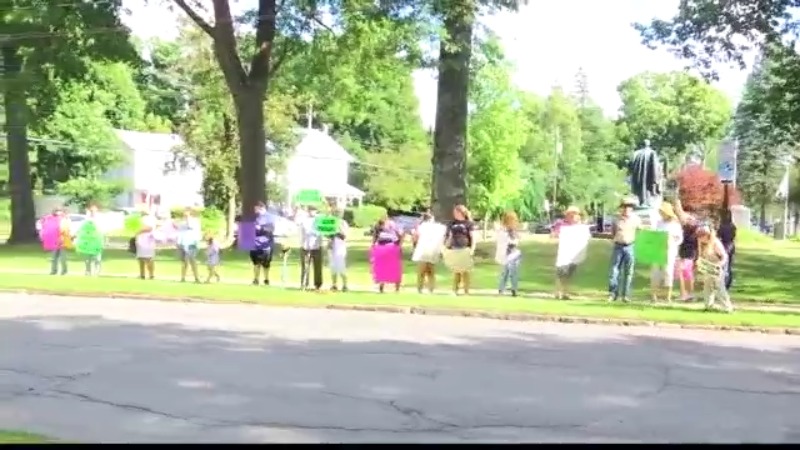 “Use you voice because it will help. It doesn’t matter how small or how big you are just use your voice and it will help” said Abbey Rhodes

Eighth grader Abbey Rhodes organized the rally at Veterans Park from 5 p.m. to 7 p.m. and was joined by nearly two dozen supporters, both young and old, male and female.

The Supreme Court’s reversal of Roe v. Wade is leading some Capital Region youth like Abbey to take action.

The decision eliminated a woman’s constitutional right to abortion. But, Abby believes other rights may be called into question.

“I have a lot of friends in the LGBTQ community and this decision could have consequences that will affect them,” said Rhodes

Abbey may not be old enough to vote, but she’s still making her voice heard.

And, candidate for the 21ST Congressional district Matt Castelli heard that voice and came to show his support.

“Abbey is a remarkable young woman who expressed the intent and desire to stand up and use her voice not just for her own rights but for the rights of so many others that under threat in this country,” said Castelli

Not all of the onlookers agreed with the protest. Joe Williams a grandfather and religious man was also emotional over the issue.

“They stand up for what they believe and that is the right to kill an unborn baby. That’s my take on it. I have six grandchildren. I have five children. I told them I would pray for them. I hope they know Jesus. I don’t know. I just wish it would all change, “ said Williams.

Rhodes says she feels lucky to live in a NY. A state that protects the rights of all.