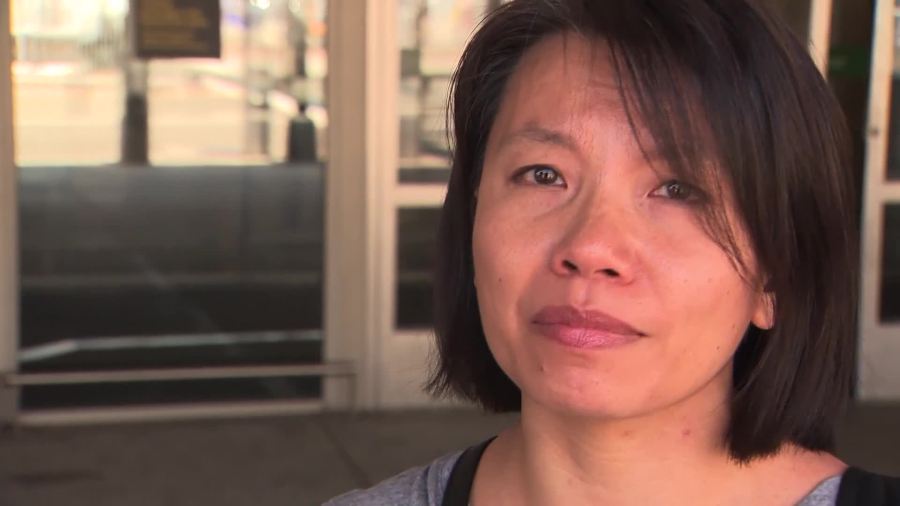 JAMAICA, Queens (PIX11) — When Bien Nguyen finally arrived at Jamaica Hospital in Queens early Friday afternoon, she was carrying a bag of clothing for her oldest son, Jossiah. The photo she had seen of the 25-year-old, taken on July 5, showed him on a subway bench with tattered jeans.

“It was pretty hard not to start crying,” she said, when asked about the devastating photo of her son, who looked homeless. But the picture started a movement to find Jossiah. “If that’s what it took just for others to look for him, and help him out, then I’m thankful for that,” the emotional mother said.

She arrived at Newark Airport Friday morning after flying direct from Savannah, Georgia. She tearfully recalled getting the call Thursday night that Jossiah was found by MTA police at the Long Island Railroad station in Jamaica, Queens. “To get the call he was found!” Bien said. “I was able to hear his voice and let him know we love him.”

She dropped everything to find a flight to New York. The quickest direct flight landed in New Jersey, where NEWS10’s sister station met her at the airport. They traveled with her to Jamaica Hospital, where her son was undergoing a medical evaluation. Bien recalled her Thursday night phone call with her at the MTA police station. “He said, ‘Mom, can you help me get some airplane tickets to head back home?’”

Bien and her husband, Yen Nguyen, started a Facebook page called “Missing Jossiah Nguyen,” and received multiple tips possibly sighting their son. The parents said they’d received one Facebook Messenger communication from their son on May 13, five days after he disappeared. He was looking for a way to get home, telling his parents he had lost his wallet and phone, but they missed the call and didn’t hear from him again.

They told PIX11 via Zoom on Sunday night that Jossiah suffered emotional problems after high school. The parents also said that he was very talented in dance, music, and sports, sending a video of him breakdancing at a show before he graduated and left home.

On June 24, the parents flew to New York City in advance of Missing Persons Day, June 25, at the Office of Chief Medical Examiner. They talked to detectives that Saturday, who told the Nguyens their son had received a summons the same day outside a liquor store on Nostrand Avenue in Brooklyn.

When Jossiah’s parents made their way to Nostrand Avenue, he was nowhere to be found. They also checked a park in Lower Manhattan, where his phone had “pinged” early in his disappearance.

On July 5, Yen’s cousin, Kim Crown, happened to be getting off the elevated subway at the Lorimer Street station in Williamsburg, Brooklyn, when she noticed someone who looked like Jossiah. He said he didn’t want help. She took the young man’s photo and sent it to his parents. Ultimately, the MTA police discovered him near the Long Island Railroad station at Sutphin Boulevard in Queens on July 21.

“He’s my oldest,” Bien said through tears. “Knowing that he was found, and that he was OK—I’m just so thankful.”