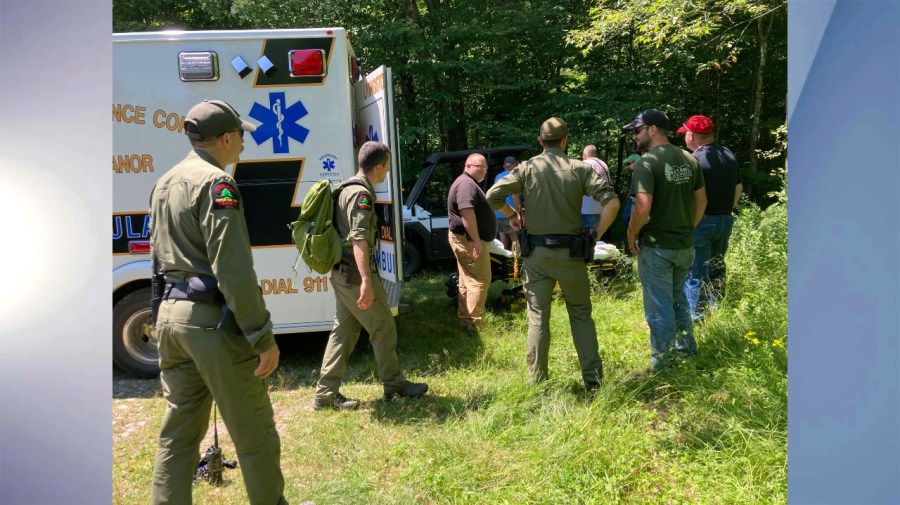 ALBANY, N.Y. (NEWS10) – If you’re lost in the woods in New York State, the first person you’re likely to call is a Department of Environmental Conservation (DEC) Forest Ranger. Over the past week, the Rangers located and saved lost, injured, and distressed people across both Ulster and Essex Counties.

The earliest Capital Region rescue of the week came on Tuesday, July 19, around 11:45 a.m. A 15-year-old camper called Ray Brook dispatch and told them that their 19-year-old counselor had slipped and hurt her ankle on the red trail coming down from Balsam Lake Mountain, in Hardenburgh.

Ranger Martin reached the subject and worked with Beaverkill Fire to carry out the patient to a waiting ambulance. Beaverkill Ambulance took the subject to the hospital for further treatment, and all resources were clear around 3 p.m.

Moving now to the Adirondacks, the following day, July 20, Rangers rescued a camper in North Elba after he reportedly had a seizure near the Flowed Lands Lake. Northern Frontier Camp of Indian Lake called dispatchers around 7:15 a.m. to report the incident, which involved a 17-year-old. The camper from Delaware was trying to hike 22 High Peaks in about a week, officials said.

Forest Rangers Evans and Martin responded with the Lake Colden caretaker. The caretaker reached the subject at the Herbert Brook lean-to and brought them to the Lake Colden Outpost, where they were airlifted to the hospital.

On July 22 at 4:10 p.m., Forest Ranger Kabrehl responded to a call for two hikers who became lost on the Grizzle Ocean Mountain trail and were running out of water. The 43-and-15-year-old hikers from Buskirk were planning to hike the big loop to Pharaoh Lake and back to the Putnam Pond Campground. The hikers made it to Pharaoh Lake and headed toward Grizzle Ocean, but lost the trail near Wolf Pond.

The subjects mistakenly thought they were in the Grizzle Ocean outlet and hiked upstream to find the trail. When they became exhausted and dehydrated, they called 911. Ranger Kabrehl found the subjects at 7 p.m., gave them water, and helped the pair back to the campground. Resources were clear at 9 p.m.

Most recently, on Sunday, July 24, at about 7:40 p.m., Forest Ranger Mecus found an injured hiker on the way down Mount Marcy. The 27-year-old from Ballston Lake became separated from her family at the summit and took a wrong turn at the Phelps junction.

The hiker fell in a drainage and hurt her leg. Ranger Mecus bandaged the injury and helped the subject to the Johns Brook outpost. At 10:40 p.m., Ranger Lewis arrived and helped the hiker to the Garden trailhead. Just after midnight, the hiker was reunited with her family.

If a person needs a Forest Ranger, whether it’s for search and rescue, to report a wildfire, or to report illegal activity on state lands and easements, they should call (833) NYS-RANGERS. If a person needs urgent help, they can call 911. The DEC website has phone numbers for every Ranger listed by region if you need information about a specific location.