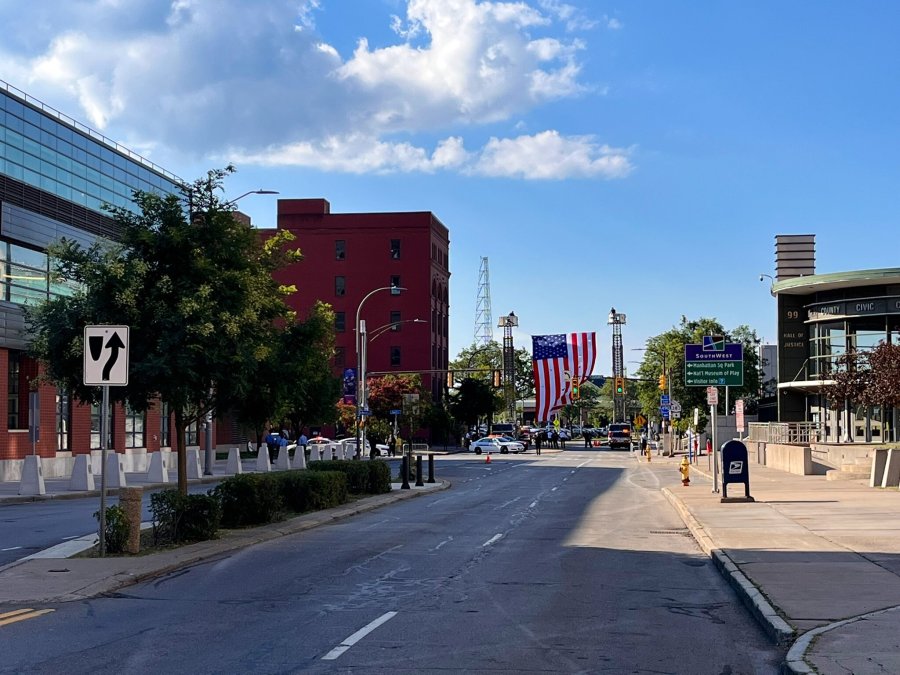 Editor’s note: The funeral procession will be live streamed on this page at 11 a.m. EST.

The procession is expected to begin at the Public Safety Building shortly after 11 a.m. and end at Blue Cross Arena. There, law enforcement and family members will honor the officer.

Police from both in and out of state have been invited to participate in the ceremony, with over 100 people expected to attend, including New York State Governor Kathy Hochul, the Patriot Guard Riders, and various agencies from across the country.

Officer Mazurkiewicz was fatally shot in the line of duty 11 days ago on Thursday, July 21. He died in what police described as “a shooting ambush” during an evening patrol along Bauman Street.

Mazurkiewicz first joined the department on April 12, 1993, after serving as a Jail Deputy with the Monroe County Sheriff’s Office for five years. He was placed under patrol on the Clinton and Goodman Sections ahead of his transfer to the Tactical Unit in 2002.

During his nearly 30 years as an officer, Mazurkiewicz received the Rochester Police Department’s Life-Saving Award, Officer of the Month award, 17 Excellent Police Service Awards, seven Unit Commendation awards, 32 Chief’s Letters of Commendation, and the Good Conduct Award for 29 years service of without a sustained complaint.

In the days leading to his funeral, several community members and organizations around the greater Rochester area commemorated Mazurkiewicz — each with their own personal touch.

A Penfield barber gave back to local police families with free haircuts, Rochester General Hospital turned its exterior lights blue for the month of July, some offered relief to on-duty officers working overtime shifts and others voiced their plea for leaders to stand against ongoing city violence.

“Choke on your thoughts, choke on your prayers,” City Councilmember Michael Patterson said. “They have a duty and a responsibility to legislate and act. If I could, if we could, we would. We can’t.”

Patterson represents the Northeast District, where the shooting of Officer Mazurkiewicz took place.


By Year: Rochester police officers killed in line of duty

Kelvin Vickers, a 21-year-old man from Massachusetts, was charged three days after the shooting death of Mazurkiewicz and received no bail. He is currently being held in Monroe County Jail.

In conjunction with the aforementioned funeral service, the Town of Perinton implemented its own plans to ensure the officer’s legacy lives on.

On Sunday, police units from numerous different agencies lit up the streets of Perinton with blue, paying tribute to the 29-year veteran as they headed west on Pittsford-Palmyra Road.

Ribbons, lights and signs were held up by community members, who paid their respects to the hometown hero. Officer Mazurkiewicz was also honored over police dispatch radio waves by department members with an end-of-watch call and a moment of silence.

Town Supervisor Ciaran Hanna says the entire community is still in a state of grief. There are plans, looking ahead, to ensure Officer Mazurkiewicz’s legacy lives on.

“We’re going to put together a committee so that we can come up with an appropriate memorial for Tony and his service to our community, and we’ll work with the family through that… they were so involved in the community there’s going to be so many options to do. We just want to do the most appropriate one,” Hanna explains.

Mazurkiewicz’s funeral is not open to the public but full coverage will be provided on News 8.

In response to the request of community members, officials released the following set of recommendations for those who are looking to help out:

Check back with News 8 WROC as we will continue to update this developing story.