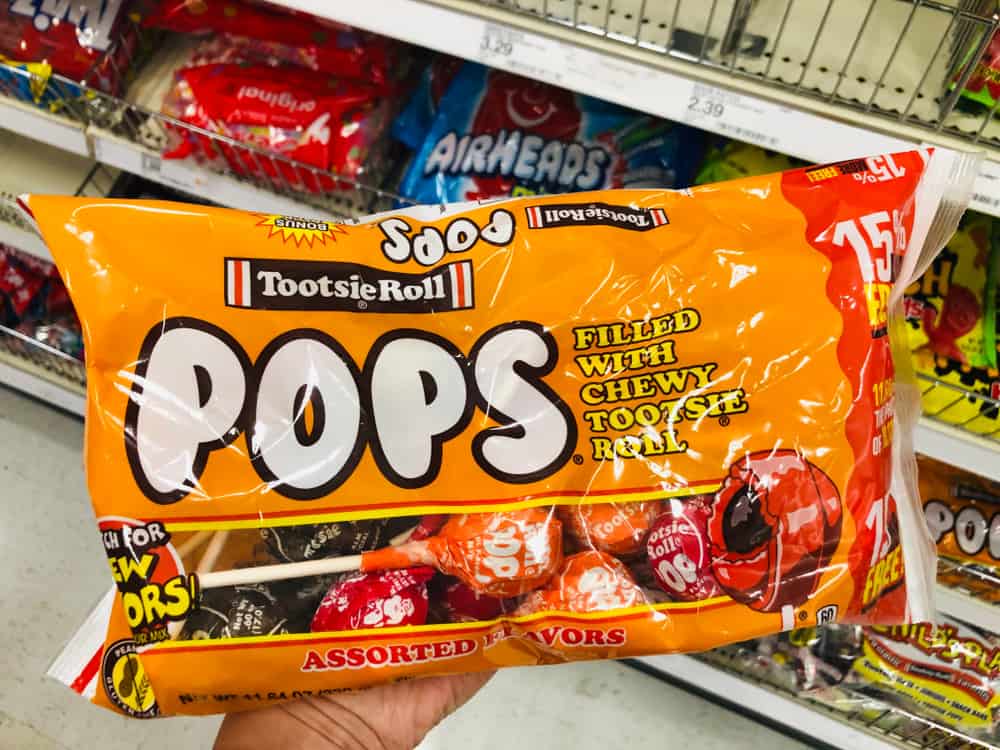 Tootsie Pops have been one of America’s favorite candy lollipops for over ninety years.

These delicious treats can be found in almost every grocery or convenience store across the country and around the world.

The tasty sucker consists of a chewy Tootsie Roll center encased in a hardened candy shell and comes in a variety of flavors. 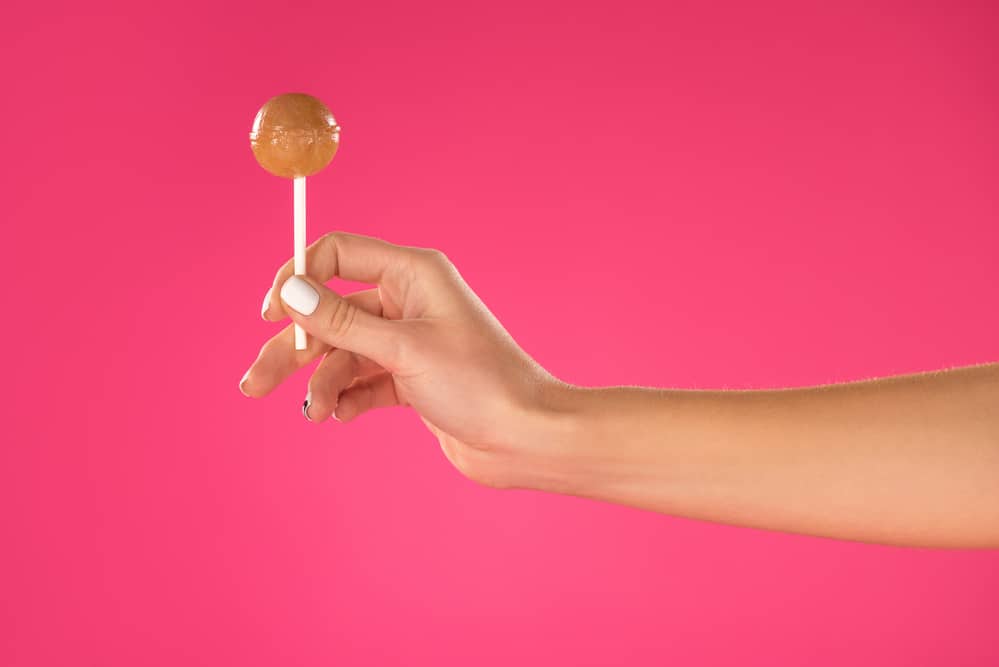 Yes – Like any candy or food product, Tootsie Pops do expire, but they don’t have a firm expiration date.

Tootsie Pops have a manufacturing date encoded on their boxes and are considered fresh for up to 12- 18 months from that date.

However, the tootsie roll pop’s expiration could be from 2 weeks to one year depending on the storage conditions.

For hard candy, the National Confectioners Association states, “Hard candies can last up to a year when stored at room temperature or in a cool, dry location.”

Where Did Tootsie Pops Come From? 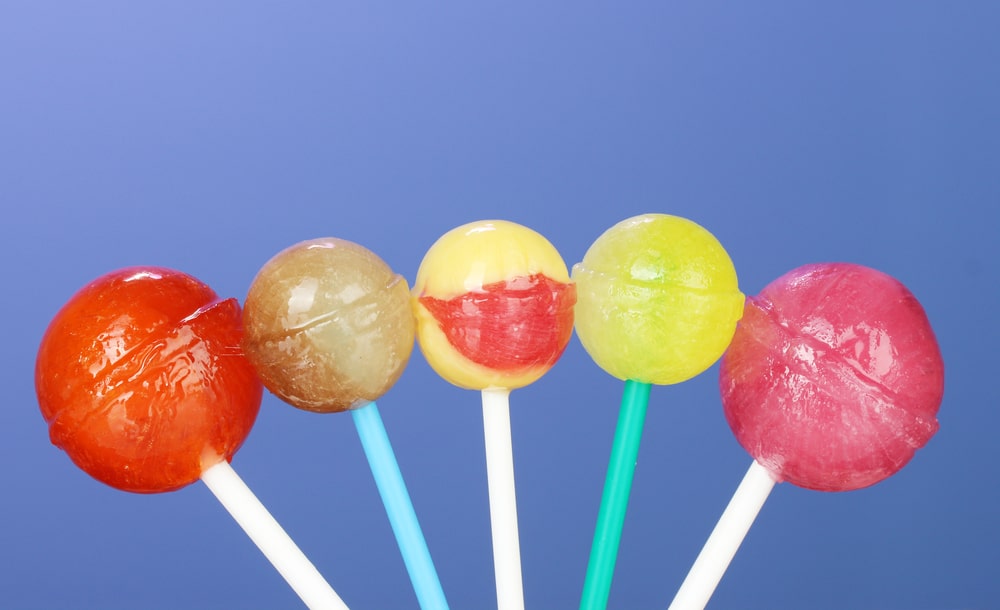 Tootsie Pops were created by the Sweets Company of America (later renamed Tootsie Roll Industries) in 1931, as a spin-off and evolution of the company’s famed Tootsie rolls.

Tootsie rolls were first introduced to the public in 1896 by Leo Hirschfield.

The candy was hand-rolled and named after his then 5-year-old daughter, Clara.

They originally sold for one penny each.

Legend has it that an employee, Luke Weisgram, of the Sweets Co. licked his daughter’s lollipop while he was chewing on a Tootsie roll.

He loved the delicious combination that resulted enough to pitch the idea to the company.

The New York-based company liked the idea and developed the first Tootsie Pop, with a chocolate-flavored candy shell.

Tootsie Pops were, and still are, advertised as the first candy with a hidden “prize” inside, the chewy Tootsie Roll center.

They quickly became popular due to their affordability during The Great Depression, becoming the world’s #1 selling candy-filled lollipop.

The success of the Tootsie Pop, in turn, saved the candy company from impending failure and bankruptcy.

In 1968, Tootsie Roll Industries moved to Chicago, where Tootsie Pops are still made today.

In 1970, the candy company released their famous commercial which featured the new character of Mr. Owl in which the question of “How many licks does it take to get to the center of a Tootsie Roll Pop?” was introduced.

The commercial has since become a classic, and the question itself has yet to find a definitive answer.

Do They Still Make Tootsie Pops? 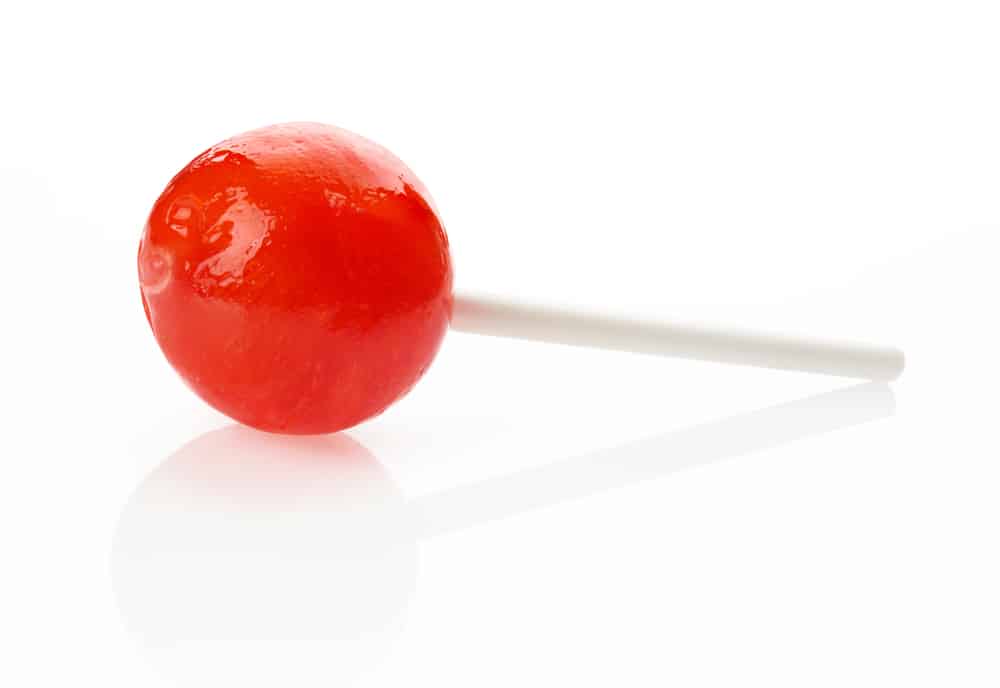 Today, Tootsie Pops remain a classic candy staple, but new flavors of the lollipop have since been introduced.

Over 20 million Tootsie Roll Pops are made every day still.

How Do You Figure Out The Manufacturing Code On Tootsie Pop Packages? 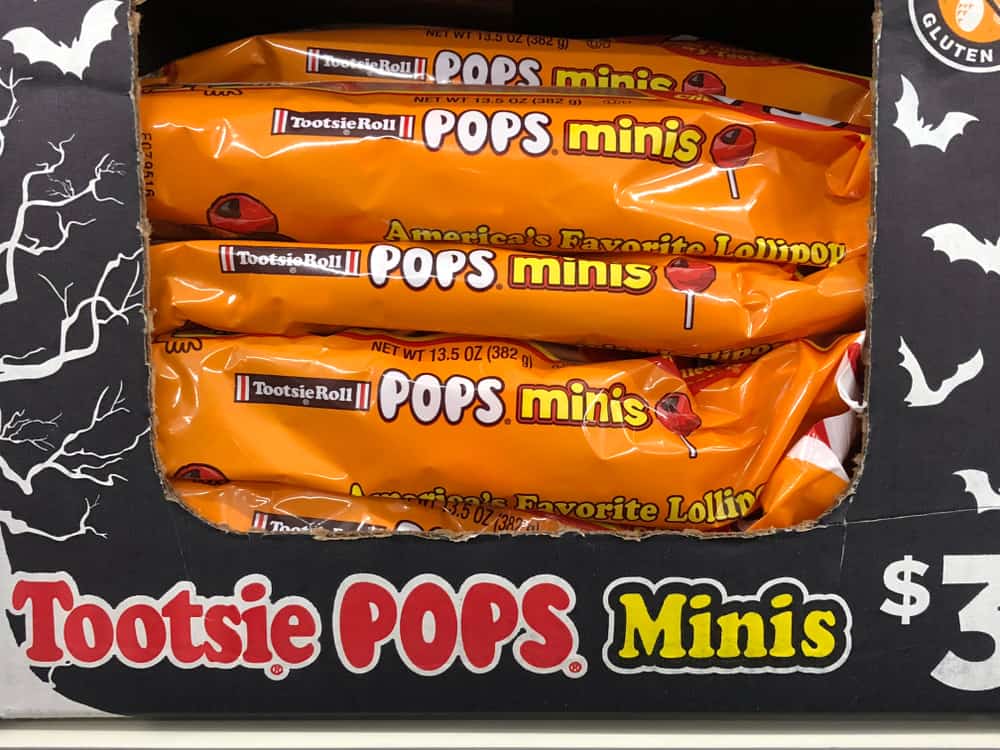 Like a lot of other foods and candies, Tootsie Pops prints a code on the outside of their package.

As already stated, the code tells you when the lollipops were manufactured, as opposed to when they expire.

However, the code may just look like a bunch of letters and numbers to the untrained eye.

To understand the code, you first must sync up the letters of the alphabet with the months of the year.

The first digit in the code is a letter, so that’s what the letters translate to.

Then, a two-digit number follows, representing the day of the month the candy was produced, while the next one-digit number represents the last number of the year it was made.

The last couple of digits can be disregarded.

To figure out the shelf life, add roughly 18 months to the manufactured date.

What Is In Tootsie Pops? 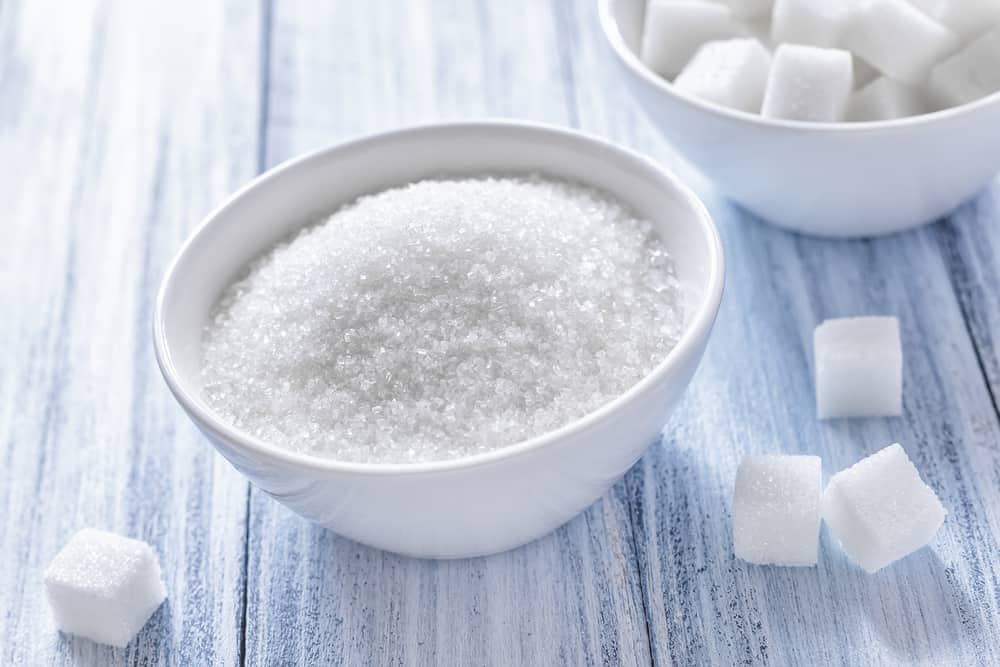 They are considered fat-free, nut-free, gluten-free, peanut-free, and kosher.

Are There Health Concerns to Consuming Expired Tootsie Pops? 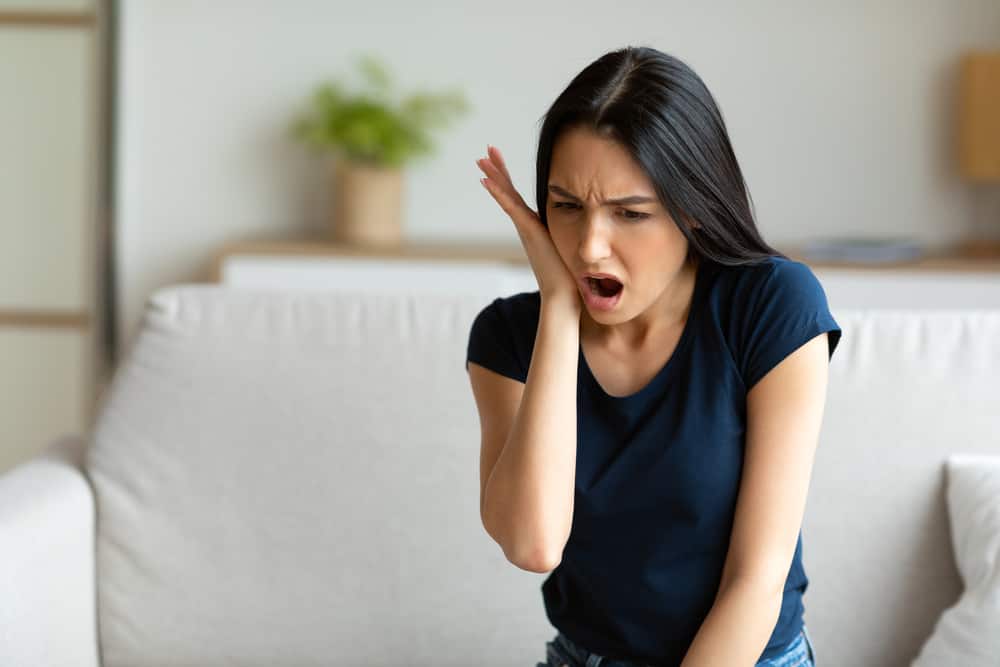 There are very few health reports of serious sickness from eating expired candies.

Microbes have been found in some candies, but they were mostly like from exposure to other elements and not in the candy itself.

There have been reported cases of salmonella poisoning from people eating old chocolate, but the cases are extremely rare.

The main health concerns to consider when eating Tootsie Pops are the high amounts of sugar.

Eating one Tootsie Pop takes up around ½-1/3 of the recommended daily added sugar intake.

Plus, sugar contributes to tooth decay, dissolving your teeth’s enamel and creating cavities.

In some extreme situations, excess sugar can lead to tooth abscesses.

Plus, hydrogenated soybean oil and artificial flavors and colors are not great for consumption.

However, some dieticians claim that the time length it takes to eat a Tootsie Pop helps consumers eat less sugar overall.

For instance, instead of eating five candy bars in ten minutes, they’ll only eat one lollipop.

The Center for Disease Control says added sugars can contribute to health problems such as weight gain and obesity, type 2 diabetes, and heart disease.

So How Many Licks Does It Really Take To Get To The Center Of A Tootsie Pop? 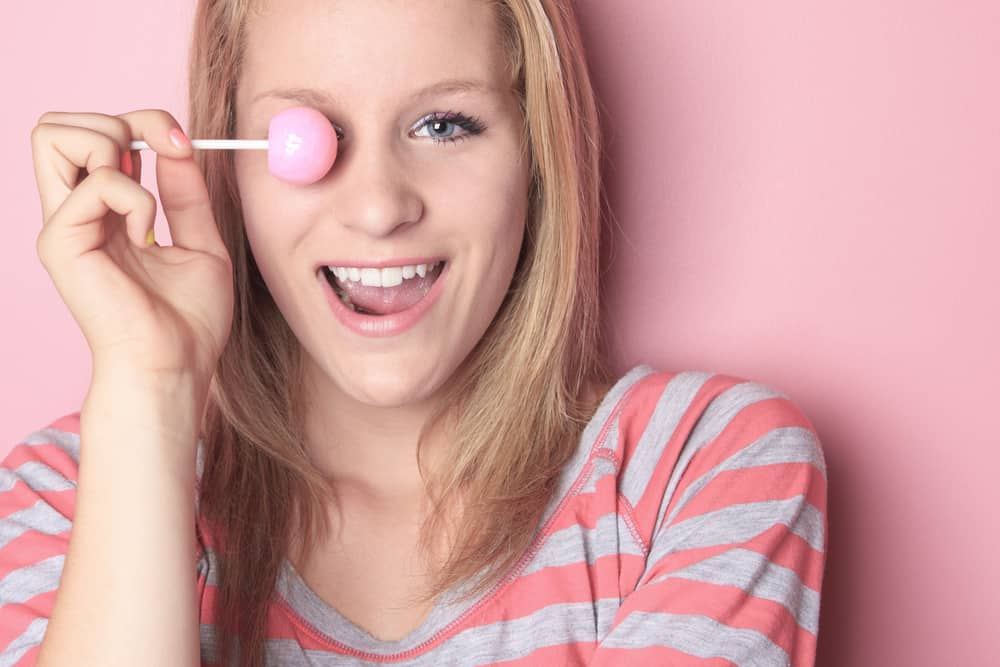 There have been several actual scientific studies focused on this topic.

Engineering students at Purdue invented a human tongue-like licking machine that calculated 364 licks to get to the center of a Tootsie Pop.

However, the students themselves performed the experiment and averaged 252 licks to the center.

An engineering student at the University of Michigan created his own licking machine that got to the center in 411 licks.

Bellarmine University used human subjects to find an average of 175 licks in 14 minutes to get to the center.

Mathematicians at New York University found the number of licks as being 1,000, much more than other studies.

However, they didn’t use Tootsie Pops specifically for the experiment.

In another test, Swarthmore High School did their own experiment using human subjects and found the average licks to be 144.

With so many varied results from these experiments, the answer is still debatable for this age-old question.

“It depends on a variety of factors such as the size of your mouth, the amount of saliva, etc.”

Can You Really Exchange A Shooting Star Wrapper For A Free Sucker? 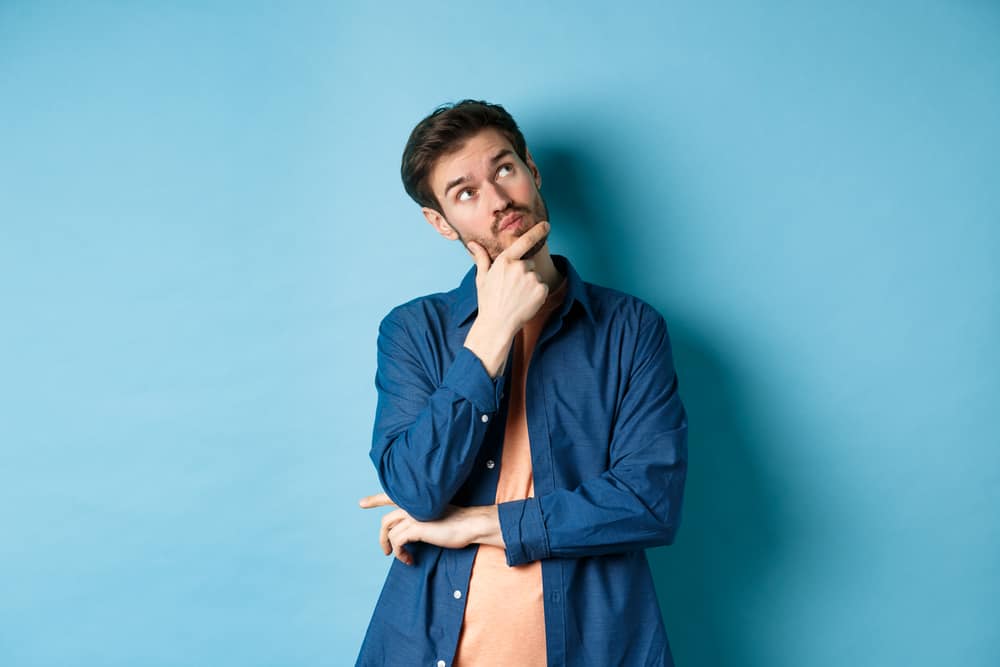 Tootsie Roll Industries claim that they do not know how a rumor got started in which children could bring in Tootsie Pop wrappers containing a shooting star and receive a free lollipop.

Either way, the rumor picked up a strong following once Tootsie Pops were first introduced.

They are wrapped in colorful wrappers, with the color correlating to the flavor inside.

On the outside of the wrapper, different mini images are depicted, one of which is a Native American shooting a white star with his bow and arrow.

Because this image is only found on 20% of the wrappers, they were believed to be special awards that warranted a small prize.

However, Tootsie Roll Industries claim that all of the images on the wrappers are only displayed on 20% of the wrappers.

This means the images all repeat every 4-6 wrappers.

In response to this rumor, Tootsie Roll Industries says:

“Unfortunately, we do not know how this rumor started and Tootsie Roll Industries has never actually honored this promotion.” 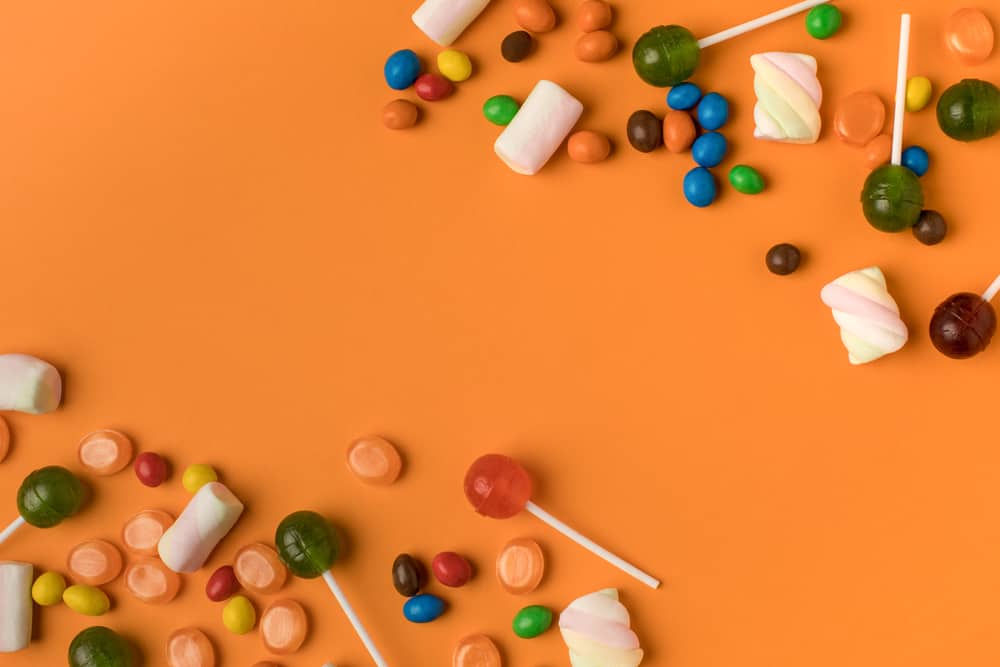 Tootsie Rolls and Tootsie Roll Pops are known for their All-American style and good old-fashioned flavors.

It begs the question, does Tootsie Roll Industries still live up to this standard?

In fact, the positions of President and CEO have been passed down through the generations, maintaining a “family-run corporate culture with a progressive management style that embraces an entrepreneurial spirit.”

The company still prides itself on creating top-quality candy products that sell for a minimal cost.

This helps keep their customer base in congruency with their original intent – good candy for a low cost.

The company is still run so well that Business Ethics Magazine named it one of its “100 Best Corporate Citizens.”

Using its Code of Business Ethics and Conduct, Tootsie Roll Industries claims to exude honesty and integrity in all of its business dealings.

Their candies have been staples in charitable drives since first establishing community involvement during World War II.

Does Walgreens Do Curbside Pickup? (2022 Updated)

Why Are The Warriors Called The Dubs? (Explained)

Why Is There Lint in My Hairbrush? (Explained)

Why Is Elvis Presley So Famous? (Explained)