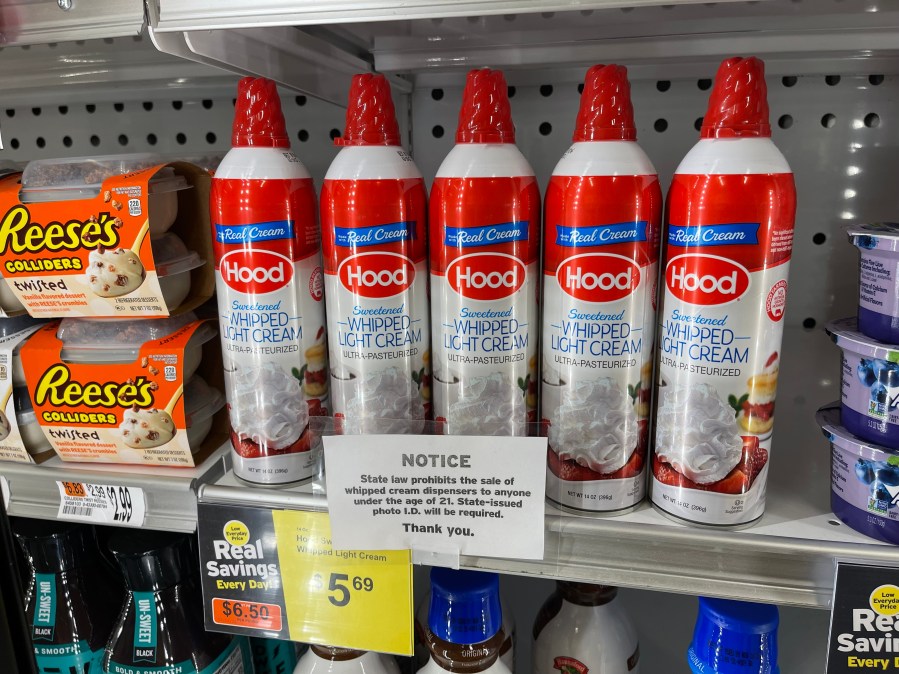 ALBANY, N.Y. (NEWS10) — You have to show ID to buy alcohol, cigarettes, and even a can of whipped cream in New York State.

If you’ve bought the tasty addition to pie or ice cream since last fall in New York, you may have seen signs telling you you’ll have to hand over more than just payment at the register. Whipped cream cans are filled with Nitrous Oxide, also known as laughing gas, like what you get at the dentist.

If used improperly and inhaled the gas, commonly called “whippets” or “whippits”, offers a euphoric effect or a type of high. Since November of 2021, anyone under the age of 21 is prohibited from buying whipped cream cans. Anyone over 21 is required to show ID at checkout.

The law primarily targets nitrous oxide canisters inside whipped cream cans, not whipped cream itself which is just guilty by association.

“I feel there should be a warning label because of the chemicals and because kids are getting high, and I’m a teacher. I don’t want my kids under the influence of any kind of drugs or alcohol learning mathematics,” says Michelle Joyner.

“So, very simply to not ban the sale. Some people want to use it for baking purposes, that’s fine. But it’s not to have it sold to minors. And it’s a safety issue,” he said. “Nothing more than a mere safety issue because these kids are getting a quick high out of this.”

According to the National Institute of Health, studies have shown younger people are more at risk when it comes to inhalants. Side effects include psychosis, nerve damage or even loss of consciousness.