In 2018, Eagle filed its Abbreviated New Drug Application (ANDA) with the FDA seeking to market a generic version of Par’s vasopressin injection product (Vasostrict) used for emergency blood pressure treatment.  Par had listed two patents in the Orange Book as covering its product and so, as required, Eagle’s ANDA included a Paragraph IV certification that the two patents were either (1) invalid or (2) would not be infringed.  35 U.S.C. § 355(j)(2)(A)(vii)(IV).

In order to facilitate resolution of brand-generic patent conflict, the Patent Laws include a form of paper infringement–a legal fiction that simply filing an ANDA and Paragraph IV certification counts as a form of patent infringement.  This gives the branded drug maker (here PAR) the ability to immediately sue to keep the generic off the market (if the patent turns out to be enforceable).  But, these Hatch-Waxman lawsuits are considered a form of declaratory relief and no actual damages are available.  This setup also means that these cases are not “Suits at common law” and so the Seventh Amendment right to a jury trial does not apply.  Thus, ANDA patent lawsuits are ordinarily decided by bench trial–and typically by one of the Delaware district court judges.  In patent law, injunctive relief has been difficult to obtain, but under the Hatch-Waxman law, the FDA will automatically delay any market approval by 30 months if the brand-patentee sued. 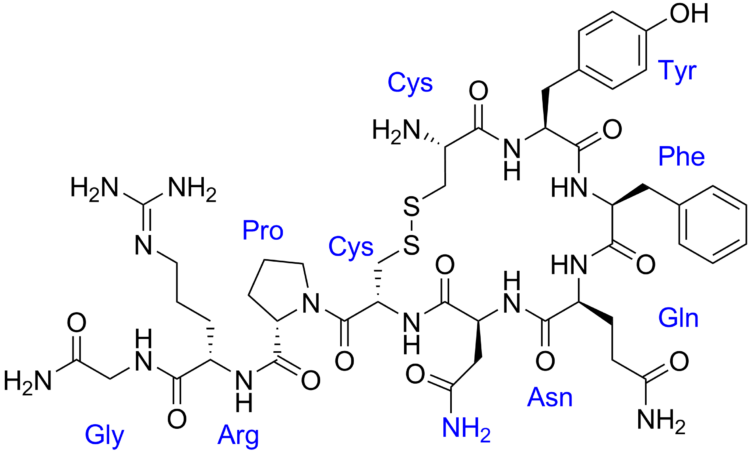 Vasopressin is a naturally occurring mammalian hormone and been generally known for decades.  As its name suggests the chemical has always been known since its naming for its ability to constrict blood vessels — the same use that Par’s patents claim.  Par’s two patents here cover a particular vasopressin composition (9,750,785) and a method of treatment using the composition (9,744,209).

Both Par patents include a pH requirement: “wherein the unit dosage form has a pH of 3.7-3.9.” In its ANDA, Eagle was careful to specify that its product would have a slightly different pH range: 3.4–3.6.  Eagle then argued that this difference was enough to avoid infringement.

Despite its nominal specifications, Par presented evidence that (it claims) Eagle’s product pH would “drift up” while sitting on the shelf.  It coupled that evidence with the very slight difference between Eagle’s product and Par’s patent to make the argument that Eagle’s product “would inevitably drift into Par’s claimed range.” Slip Op.   The district court (Judge Connolly) held a three-day bench trial and ultimately issued a judgment of noninfringement.  In particular, Judge Connolly concluded that the evidence failed to prove any upward drift of pH, but rather simply “minor fluctuations” without “any discernable trend.” Id. On appeal, the Federal Circuit has affirmed–seeing no “clear error” in the district court’s factual findings.

I mentioned above that this form of ANDA-filing infringement is a legal fiction created by Congress to facilitate a more competitive marketplace.   One problem then is that there is no actual product to inspect.  We have the ANDA filing, but there  are always substantial design choices before final release.   The prophetic inquiry thus looks to what is the “probable ANDA product” and asks whether that probable product would be infringing if actually made.

Still, the primary guide is the ANDA documents as the source of infringement in this highly regulated area. At times, a court can look to other relevant evidence, but only when the ANDA filing fails to “speak clearly and directly to the question of infringement.”  Rather, the court assumes that the ANDA filer will “act
in full compliance with its representations to the FDA.”  In re Brimonidine Patent Litig., 643 F.3d 1366, 1378 (Fed. Cir. 2011).

No Declaratory Judgment of Infringement. (Neither court decision discusses the doctrine of equivalents.)

I have not thought through all the claim preclusion issues. But, once the product is released Par may be precluded from suing again based upon res judicata and the Kessler Doctrine.