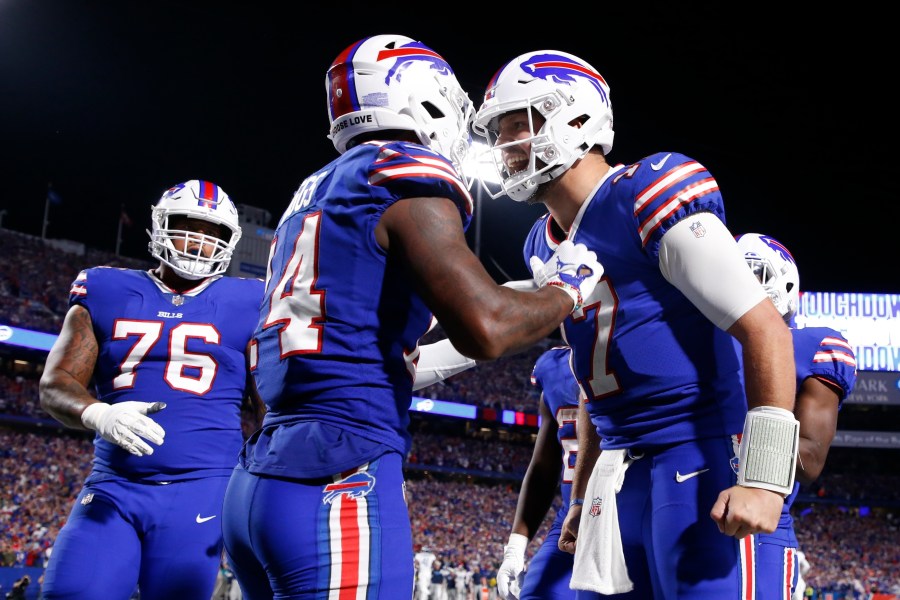 ORCHARD PARK, N.Y. (WIVB/AP) — Once again, the Bills come out with a win to start the season 2-0. They didn’t just beat the Titans on Monday night football, they destroyed Tennessee with a 41-7 win that followed a 31-10 victory the week before against the defending Super Bowl champs.

The victory came with a cost. Buffalo Bills cornerback Dane Jackson was released from the hospital on Tuesday after tests revealed he sustained no major injury to his neck or spinal cord when he was struck by a teammate on Monday night.

The Bills did not provide any other details of the extent of Jackson’s injury except to say he was undergoing further evaluation. But after the game, linebacker Von Miller owed the victory to the mindset that fuels the team.

“It’s a killer instinct, it’s a blood-in-the-water instinct. I don’t know how it was before I got here, but now, like, we pedal to the metal. We have an attitude of domination. We’re not playing the game to just win the game. We’re playing the game to dominate the game,” he said. “We got a team full of killers and it’s led by our quarterback, our head coach, the leadership on this team.”

That dominance was on full display against the Titans as the Bills scored 34 unanswered points against last year’s No. 1 seed in the AFC. The Bills shut down dynamic running back Derrick Henry, limiting him to just 25 rushing yards on 13 carries. Henry had Tennessee’s only touchdown of the game on a two-yard run to the end zone in the first quarter.

Jackson was hurt late in the second quarter when he tackled Titans receiver Treylon Burks from behind following a 12-yard catch. As Jackson lay on Burks’ back, linebacker Tremaine Edmunds dived in late and struck his teammate directly in the helmet. Jackson’s neck snapped back following the impact. Jackson had full movement in his limbs as he was being evaluated by medical officials on the field before he was loaded into an ambulance.

“You go from being a coach to just being a human when I’m out there watching him getting loaded into the ambulance. That’s a real moment,” coach Sean McDermott said following the game. “Just praying for him. It’s an unfortunate situation but we’re praying for him.”

The Bills also forced four turnovers, one a pick-six by linebacker Matt Milano. And offensively, Josh Allen was rolling so much he got to end his night early, as Case Keenum came in right before the fourth quarter started. Allen finished with 317 passing yards and four touchdowns, three of those to Stefon Diggs.

Jackson is a third-year player who began the season starting in place of Tre’Davious White, who continues to recover from a left knee injury he suffered last year. Buffalo’s defense was thinned further by injuries against the Titans. Safety Micah Hyde (neck), defensive tackle Jordan Phillips (hamstring), and Milano (stinger) did not finish the game.

The Bills (2-0) are off until Thursday, when they return to practice in preparation to play at their AFC East rival Miami Dolphins on Sunday. It’s easy to see why they are considered the Super Bowl favorites, especially after the two clinics they put on to start the season. But Miller, a two-time Super Bowl champ himself, urged caution.

“Whenever you start thinking about Super Bowls it’s like drinking from a fire hydrant. You just gotta take it one play at a time,” Miller explained. “It’s 17 weeks, and football is a humbling sport. You’re gonna be met with adversity at some point, and we just keep preparing for that adversity. Whenever we’re up, we just keep saying to each other, like, don’t blink! Don’t let our foot off the gas.