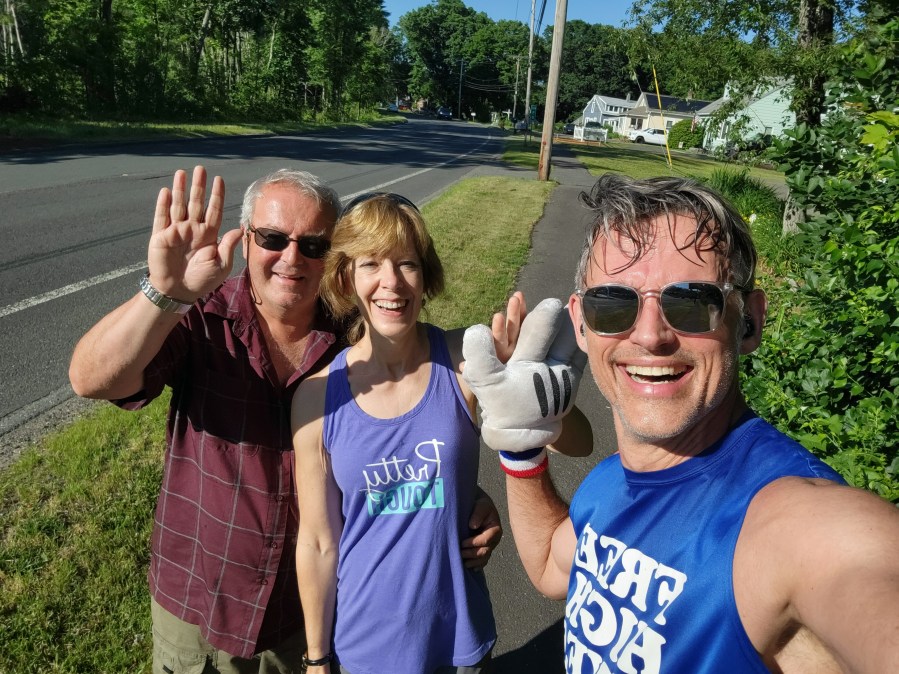 BELCHERTOWN, Mass. (WWLP) – A Belchertown resident has been spreading positivity, good vibrations, and uplifting over thousands of people with high fives on his daily runs. NEWS10’s sister station in Springfield spoke to the Liberty Woods “high five guy,” Brent Walton, on why he spreads high fives to others.

“It takes them out of their bubble perhaps that morning, maybe they’re having a bad day, and then you know you kind of break that cycle for a moment by you know doing something unexpected. And I think it just induces a little bit of joy or happiness into their day,” Walton expressed.

“People you know are often excited to give me a high five back if they are driving by out their window,” he added. “It’s outside of the box, but it’s like you know ok. You just get out there and do what sets you on fire. We need the world to have more people that are just like lit up from inside.”

Brent Walton is celebrating his 7th year in high-fiving those he passes by when he jogs or when he enters a building.

Walton originally started to give high fives when he lived in Utah for six years before moving down to Belchertown on January 26. His idea to give high fives sparked one day while getting an oil change at Salt Lake City. He had free time to spare, in which he took a run, but on his way back, he had the thought to put his hand out and that’s when he began to start high-fiving people out of nowhere. The smiles he got from strangers, encouraged him to keep doing it.


NH man killed after tree falls on pickup in Lenox

He then made it into a routine where he would head into Liberty Park in Salt Lake City and high-five the people that were either rollerblading or biking. When he came to Belchertown to be closer to family, he knew he wanted to continue to bring high fives, but was uncertain how people were going to react.

One of the destinations is the Dunkin Donuts on Federal Street of Belchertown to say hello to the workers and customers.

Belchertown Federal Street Dunkin Donuts manager, Colleen Soja says, “Brent brings great enthusiasm to the town, he stops in every morning on his jog through, comes in, gives a high five to the crew, gets us really motivated and he also interacts with the customers and gets them on their way. We got a lot of customers that appreciate him and look forward to seeing him give a high five. It gives them a good start to their morning.”

“He gives us a boost as much as he gives the town a boost,” Soja added.

Ever since he began doing this act of kindness, about three times a week, he is becoming more recognizable around the town. 22News asked if Walton plans to do this courageous act long-term.

“I don’t see a reason to stop, I think we always have the opportunity to raise the vibration around us, if we see it that way. We are energetically beings, we are made up of different molecules and we are vibrating really, at like an atomic level and it’s like how can we continue to raise that energy for the people around us and into the world because there is plenty of negative things happening in the world, you know we can’t often do anything about those necessarily. Well it’s like, I can just go spread joy, happiness, cheer, whatever you want to call it and that’s my way, it’s kind of like my super power.

Next time you’re passing through Belchertown, be sure to high-five Walton. Walton usually starts his run from his property near Federal Street and will run up to the town hall and then loop back around. His runs are usually 3.5 miles long. He will high-five pedestrians on sidewalks and those in cars along the way, but a lot of times it will be from a distance.