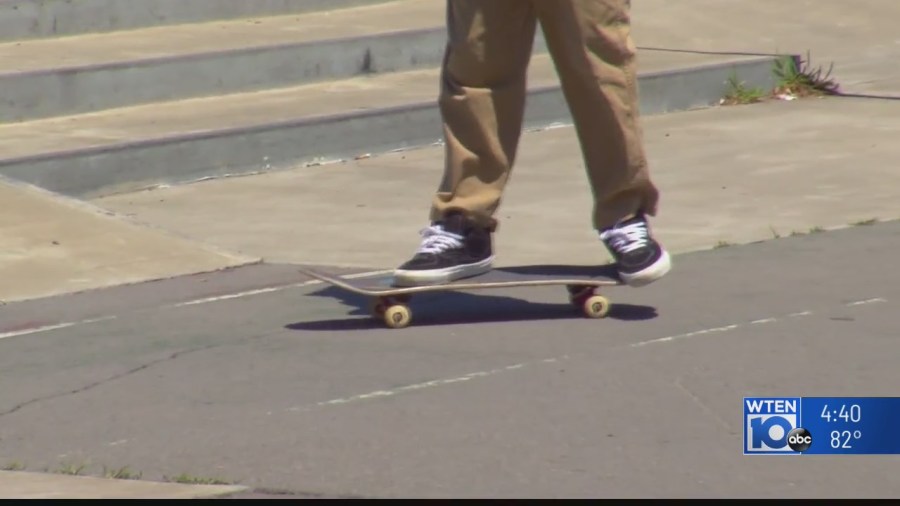 ALBANY, N.Y. (NEWS10) — Through all the sick flips and tricks, sometimes skateboarders still get a bad rap, but that’s changing quickly. Allan Mercedes says he’s found comfort while skateboarding through the pandemic, and many others feel the same.

“I’ve met a lot of cool new people, and I’ve grown so much as a person. I’ve learned a lot of things about life through skateboarding,” Mercedes says. “I don’t want to hurt anyone, I just want to do what I want to do and that’s skateboarding.”

“[In] 2020 with COVID, people want to explore different avenues to be outside in a safe space, and a safe way, and also having skateboarding to come up as a sport in the Olympics too has been tremendous,” explains Tatiana Gjergji, the executive director and founder of Noteworthy Resources.

The group petitioned to Albany’s Common Council to repeal an ordinance that bans skateboarding in downtown areas. The current law limits skating in most public places, but only on Lark Street south of Madison Avenue on the west, Clinton Avenue on the north, Broadway on the east and Myrtle Avenue on the south.

“Of course there has to be a restriction, but we just want to be treated as equally as cyclists,” says Gjergji.

“It doesn’t have the negative connotation that it did many years ago,” says Ward 6 Representative Gabriella Romero.

The councilwoman agrees times have changed and skateboarding isn’t what it was 30 years ago when the law first entered the books back in the 90s. During Thursday’s meeting, the council will address her proposal that suggests canceling the skate restrictions on places like roads, parking lots, basketball and tennis courts — which only leaves the rule to stay off public monuments.

“As our city is moving towards less reliance on vehicles — addressing our climate crisis — we should be enacting infrastructure and laws that protect and encourage non-vehicular forms of transportation,” Romero explains to NEWS10’s Mikhaela Singleton.

She also says while there has been some opposition, New York State law already addresses many concerns, such as using skateboards on sidewalks and damage to property.

“We want to codify this in our local law and there will be another proposal coming in August that will more clearly just solidify no use on sidewalks. It’ll be essentially restating the New York State Transportation and Safety law, so we have addressed those concerns,” Romero says.

She says the next step is improving highways and byways so cars can better share the road. She says key walkability advocate groups see the ordinance to allow skateboarding as a jumping off point to further push for bike lanes and safety standards in the Lark Street revitalization plan and Washington Park traffic study, respectively.

Albany Common Council meetings are usually scheduled for the first and third Monday of every month; however, due to the Independence Day holiday, the meeting is rescheduled for Thursday, July 7 at 7 p.m.