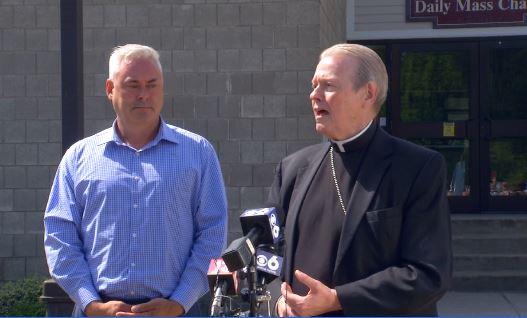 ROUND LAKE, N.Y. (NEWS10) — Almost 34 years to the day in front of the very spot Stephen Mittler met his abuser, former priest Mark Haight, he took another step — meeting with Bishop Edward Scharfenberger of the Roman Catholic Diocese of Albany.

“It was a very productive conversation, certainly we’re not in an environment of being fully on the same side of things, but we do want to have an ongoing relationship and continue to talk about this and see what we can to do help other victims,” Mittler said.

Mittler was the first to settle with the diocese in June with the Child Victim’s Act, a law passed in 2019 that allows victims of sexual assault to sue their abusers up until the age of 55.

Mittler said he’s taking this step for other survivors.

“It’s liberating because I know that I’m talking for hundreds of people and the folks that are coming forward to me, individually, they’ll message me or get my number and I can’t be their therapist, but I can certainly let them know that you’re not alone and all the support that I’ve gotten,” Mittler said. “There’s no shame in it no embarrassment and that’s why I’m being so vocal.”

Reflecting on his meeting, he said it took a lot to go from “John Doe” to Stephen Mittler, sharing the story with his brothers only months ago and now, sharing it with the world.

“It was something that was really deep down and I’m very fortunate we can sit down and have an audience with the Bishop,” Mittler said.

He said he hopes other victims will see this and come forward. The Bishop, Edward Scharfenberger, said that’s something the Albany Roman Catholic Diocese looks forward to.

“I want nobody to be afraid, I want nobody to feel they have to hide and I want everybody who, in any way, has been a victim of sexual abuse, not only by clergy but we all know it’s common in our society, to know they do not have to hide,” Scharfenberger said.