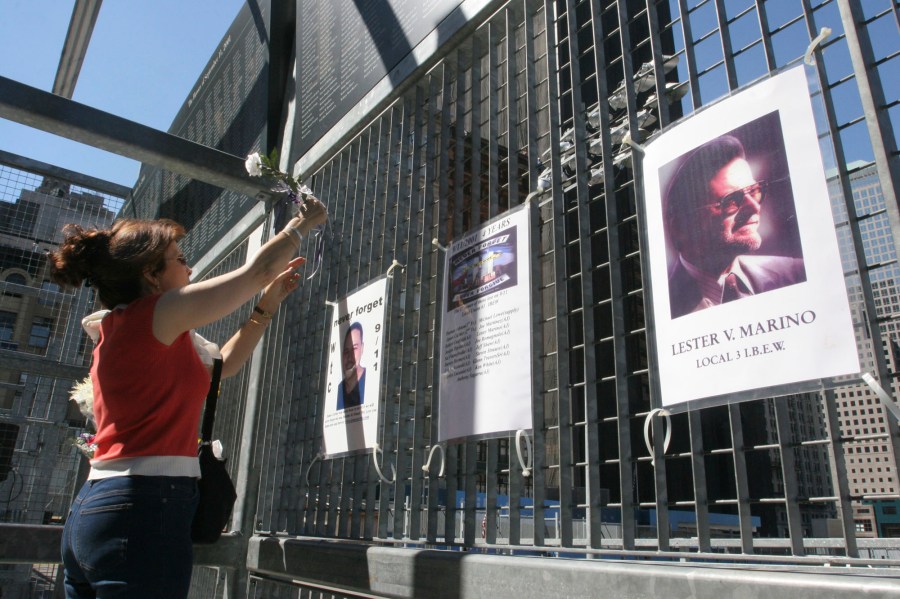 NEW YORK (AP) — Hours before dawn on March 1, 2003, the U.S. scored its most thrilling victory yet against the plotters of the Sept. 11 attacks. The captured. disheveled Khalid Shaikh Mohammed was hauled away by intelligence agents from a hideout in Rawalpindi, Pakistan.

The global manhunt for al-Qaida’s No. 3 leader took 18 months. But America’s attempt to bring him to justice, in a legal sense, has taken much, much longer. Critics say it has become one of the greatest failures of the war on terror.

As Sunday’s 21st anniversary of the terror attacks approaches, Mohammed and four other men accused of 9/11-related crimes still sit in a U.S. detention center in Guantanamo Bay. Their planned trials before a military tribunal have been endlessly postponed.


9/11 memorial events in the Capital Region

The latest setback came last month when pretrial hearings scheduled for early fall were canceled. The delay was one more in a string of disappointments for relatives of the nearly 3,000 victims of the attack. They’ve long hoped that a trial would bring closure and perhaps resolve unanswered questions.

“Now, I’m not sure what’s going to happen,” said Gordon Haberman, whose 25-year-old daughter Andrea died after a hijacked plane crashed into the World Trade Center, a floor above her office. He’s traveled to Guantanamo four times from his home in West Bend, Wisconsin, to watch the legal proceedings in person, only to leave frustrated.

“It’s important to me that America finally gets to the truth about what happened, how it was done,” said Haberman. “I personally want to see this go to trial.” If convicted at trial, Mohammed could face the death penalty.

When asked about the case, James Connell, an attorney for one of Mohammed’s co-defendants—one accused of transferring money to 9/11 attackers—confirmed reports both sides are still “attempting to reach a pretrial agreement” that could still avoid a trial and result in lesser but still lengthy sentences.


Who was Ayman al-Zawahiri?

David Kelley, a former U.S. attorney in New York who co-chaired the Justice Department’s nationwide investigation into the attacks, called the delays and failure to prosecute “an awful tragedy for the families of the victims.” He called the effort to put Mohammed on trial before a military tribunal, rather than in the regular U.S. court system, “a tremendous failure” that was “as offensive to our Constitution as to our rule of law.” “It’s a tremendous blemish on the country’s history,” he said.

The difficulty in holding a trial for Mohammed and other Guantanamo prisoners is partly rooted in what the U.S. did with him after his 2003 capture. Mohammed and his co-defendants were initially held in secret prisons abroad. Hungry for information that might lead to the capture of other al-Qaida figures, CIA operatives subjected them to enhanced interrogation techniques that were tantamount to torture, human rights groups say. Mohammed was waterboarded—made to feel that he was drowning—183 times.

A Senate investigation later concluded the interrogations didn’t lead to any valuable intelligence. But it has sparked endless pretrial litigation over whether FBI reports on their statements can be used against them—a process not subject to speedy trial rules used in civilian courts.

The torture allegations led to concerns that the U.S. might have ruined its chance to put Mohammed on trial in a civilian court. But in 2009, President Barack Obama’s administration decided to try, announcing that Mohammed would be transferred to New York City and put on trial at a federal court in Manhattan.


US raid in Syria targeted the leader of ISIS, Biden says

“Failure is not an option,” Obama said. But New York City balked at the cost of security and the move never came. Eventually, it was announced Mohammed would face a military tribunal. And then over a dozen years passed.

Kelley said talk of military tribunals two decades ago surprised many in the legal community who had been successfully prosecuting terrorism cases in the decade before. The concept of a tribunal, he said, “came out of the blue. Nobody knew it was coming.”

Then-Attorney General John Ashcroft was not in favor of tribunals and had been supportive of the Manhattan federal terrorism prosecutions, he said. Now, Kelley said, with the passage of time it will be much more difficult to prosecute Mohammed in a tribunal, much less a courtroom. “Evidence goes stale, witness memories fail.”

The passage of time hasn’t dulled the memories of the victims’ families or dampened their interest in witnessing justice. Eddie Bracken’s sister Lucy Fishman was killed at the trade center. The New Yorker opposed Obama’s proposal to move the trial to federal court—Mohammed is charged with “a military act,” and should be tried by the military, he reasoned. And while he is somewhat frustrated by the delays, he understands them.

“The whole world is looking at us and saying, ‘What are they doing after all this time?’” he said. But he realizes the case is “a process that the world is seeing, that needs to be done under a microscope. … It’s up to the United States to do their due diligence, make sure it’s done right.”

“The wheels of justice turn. They turn slowly, but they turn. And when the time comes, and it’s said and done, the world will know what happened,” he adds.

While Mohammed has lingered at Guantanamo, the U.S. killed al-Qaida leader Osama bin Laden in a 2011 raid and deputy-turned-successor Ayman al-Zawahri in a drone strike just this August. Investigators with the military commission at Guantanamo Bay said he plotted the 9/11 attacks for three years. They cited a computer hard drive seized at his arrest which they said contained photographs of the 19 hijackers, three letters from bin Laden and information about some hijackers.

Mohammed, at his tribunal hearing, conceded in a written statement that he swore allegiance to Osama bin Laden, that he was on al-Qaida’s council and that he served as operational director for bin Laden for the organizing, planning, follow-up, and execution of the Sept. 11 plot “from A to Z.”

According to the statement, he also took credit for the 1993 bombing of the World Trade Center; an attempt to down U.S. jetliners using bombs hidden in shoes; the bombing of a nightclub in Indonesia; and plans for a second wave of attacks after the 2001 attacks targeting landmarks like the Sears Tower in Chicago and Manhattan’s Empire State Building. He also claimed credit for other planned attacks, including assassination attempts against then-President Bill Clinton in 1994 or 1995 and an assassination plot against Pope John Paul II at about the same time, the statement said.

Mohammed’s nearly two decades in legal limbo differs from the fate of his nephew, Ramzi Yousef, the mastermind of the 1993 World Trade Center bombing that killed six people, injured 1,000 others, and left a crater in the parking garage beneath the twin towers. Yousef is serving life in prison after being convicted at two separate civilian trials. He was also captured in Pakistan, in 1995, but was brought to the U.S. for trial.


‘This couldn’t have been an accident’: On-scene FBI agent remembers 9/11 attacks

At the time, Yousef said his right to kill people was comparable to the U.S. decision to drop a nuclear bomb in World War II. Mohammed has offered a similar justification, saying through an interpreter at a Guantanamo proceeding that killing people was the “language of any war.”

Bracken traveled to Guantanamo in 2012 to watch one hearing for Mohammed and his co-defendants, and would probably go again if a trial ever happened. “I don’t know if I want to go there again to bring back all the hurt and pain. But if I’m allowed to go, then I guess I would go. Yeah. My sister would do that for me.”


9/11 brought about a more secure southern border, but put more scrutiny on migrants, people of color